Israeli naval commandos inspecting wooden carts containing Syrian made M-302 rockets loaded on the KLOS-C at the Iranian port of Bandar Abbas. the rockets were later covered with another cargo of cement, loaded at the Iraqi port of Um Qasr. The destination of the cargo was Port Sudan in the Red Sea. Photo: IDF

Earlier today the IDF naval forces have seized a large shipment of weapons sent from Iran and destined to the Gaza strip. The shipment was discovered on a cargo vessel intercepted in the Red Sea on its way from Iran to Sudan. The vessel is currently heading under Israeli control to the Israeli port of Eilat, where it is expected to anchor in 2-3 days. The operation, code named “Full Disclosure” was based on precise intelligence collected throughout the Middle east, that enabled the IDF to locate, track and eventually seize the shipment en-route to the Gaza Strip.

Last night, following extensive preparations, and on the government’s authorization, the IDF Chief of the General Staff, Lieutenant General Benjamin (Benny) Gantz, ordered the Israel Navy to intercept the Klos-C, a Panama registered cargo vessel that departed from the port of Um Qasr in Iraq 22 February carrying civilian cargo. IDF naval commandos that boarded the vessel have found a load of Syrian made M-302 (302mm) heavy rockets. The Israeli raid took place a day before the ship was set to dock in Sudan, some 1,500 kilometers off the coast of Israel. 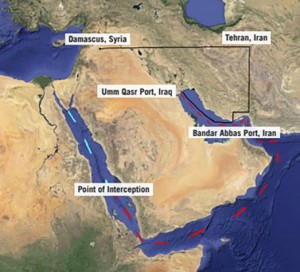 The KLOS-C loaded the rockets at the Iranian port of Bandar Abbas. From there she sailed to the port of Umm Qasr in Iraq, taking another load of cement destined to Port Sudan in the Red Sea.

Several months ago, IDF intelligence identified a weapons transfer of M-302 rockets, known to be manufactured in Syria, from Damascus to Tehran. These rockets were being flown from the International Airport in Damascus to Iran in a move carefully orchestrated by the Quds Force. This unusual event caught the attention of Israeli intelligence, as most arms transfers are taking place from Iran to Syria, not vice versa.

After landing in Tehran the shipment was moved to the port of Bandar Abbas, south of the Straits of Hormoz, where it was subsequently loaded onto a Panama registered commercial cargo vessel identified as the KLOS-C. This is the same port used to load up the Francop, another ship involved in an Iranian weapon smuggling attempt in 2009.

From Bandar Abbas the KLOS-C sailed to Umm Qasr Port in Iraq. It was loaded with more containers, all
holding bags of cement – in an attempt to obscure its true cargo and Iranian connection. From Iraq the ship headed towards Port Sudan. As the ship entered the Red Sea, it was intercepted by Israeli naval forces, including missile ships and the Naval Commando (Shayetet 13) who boarded the vessel and uncovered its illegal cargo. The Israeli authorities believe that the rocket cargo would have been unloaded in Port Sudan and the rockets would have been transferred via land, through the Sinai Peninsula reaching Gaza few weeks later. 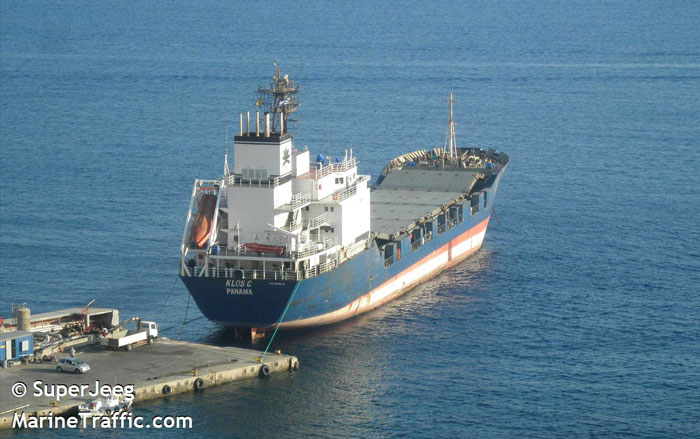 The KLOS-C seen at one of its recent port visits. Photo: Super Jeeg, Marinetraffic.com

According to Israeli assessments, KLOS-C may not be the first arms smuggling ship that is intercepted by the IDF, but it is distinguished by the lethality and quality of its cargo – previous shipments contained standard weaponry such as mortars, rifle ammunition, and 122/220mm rockets rockets. This shipment, while certainly containing some of these, comprised weapons with a dramatically larger strike range and substantially heavier rocket warheads than previously seen in the region.

M-302 rockets were used against Israel during the 2006 war, fired by Hezbollah against targets in Central Israel. The basic model first appeared during the early 1990s carrying a 170kg warhead over a range of 90-100 km (55-60 miles). It have since evolved into different variants offering strike ranges between 100 to 215 km and warhead weight of 175 – 125 kg.

Seizing the weapons cargo of the KLOS-C is one in a series of successful operations conducted by the Israel Navy, against Iranian weapons shipments destined to Gaza in recent years. On January 22nd, 2002, Isreali Navy commandos boarded the merchant vessel Karine-A which had been purchased by Palestinian owners in order to smuggle weapons from Iran to the Gaza Strip. The ship had loaded 50 tons of weapons in Iran, sailed through the Persian Gulf and was stopped on its way to Israel. In 2009 the Israel Navy intercepted the Antiguan registered Francop, that carried 500 tons of Iranian-made weapons. Iranian weapons were also found on the Cypriot merchant vessel Monchegors when boarded by Capriot inspectors. On March 2011, Israeli Navy commandos boarded the civilian vessel Victoria as she was heading from Syria to the Egyptian port city Alexandria. The ship was carrying approximately 50 tons of concealed weaponry, including Iranian-made C-704 surface-to-sea missiles, mortars and ammunition. The shipment was intended for terror organizations in the Gaza Strip.