This information was revealed in an article titled "Quietly waves wing fly away" published recently in the newspaper People's Army.

"... In recent years, along with factory Z119 and the relevant agencies, industry is leading the project radar" investments improved radar station P-18 "with a 100% transfer of technology design and manufacturing creation, "the article said.

Radar is designed to replace the P-12, in use since 1970 and is widely exported to many countries around the world including Vietnam.

Although quite old but radar station P-18 is still an important component in protecting the entire network radar airspace and territorial waters of Vietnam. In particular, our troops have taken the P-18 radio to strengthen Spratlys defense forces here. 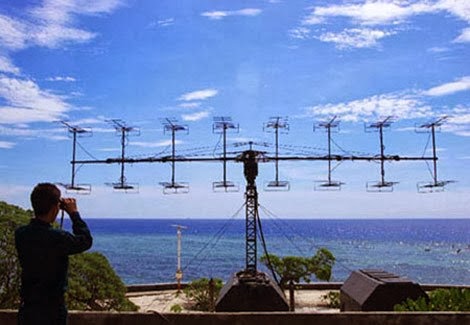 P-18 radar stations are deployed in the Spratlys (photo : kienthuc)

Accordingly, radar stations will be equipped with the innovative digital processor capable of distinguishing targets in cluttered environments and better resistance to interference. A built-in self-test detects abnormal error of the system, the control room is equipped with multi-screen display function provides the ability to better target Surveys.

Or it could also be upgraded P-18mA pack of Ukraine to Vietnam many interesting properties. Equipped with microprocessor digital signal MTI, operating frequency range extended from 140-180MHz, generators are modular design is very convenient for maintenance and upgrades.

The range of P-18mA reconnaissance increased to 360km, accuracy decreased from 1,400 m to 180m upgrade no later upgrade. Time to deploy combat-ready reduced from 8 minutes to 3 minutes, the power consumption from 6kW to 10kW. With P-18mA stealth fighter F-117A was "unmask" from a distance of 61km.

"Project completion, Z119 factory can produce all the details of 1 meter wave radar stations; Force helps solve significant problems to ensure proper equipment for a radar system in direct and intensive task directives and guidance. Thereby, has trained a staff, technical staff qualified to meet the technical requirements to ensure that the majority of new conditions. Currently, in order to meet mission requirements increasing training SSCD, the industry has been actively monitoring programs and improved radar and weaponry production, "the article adds.