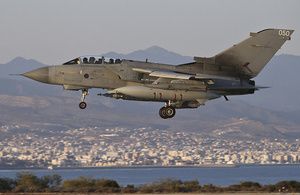 Royal Air Force aircraft struck a large concentration of ISIL vehicles last night as the UK continued its work as part of an international coalition in the fight against terrorism.

Two RAF Tornado GR4s were tasked to investigate reported ISIL activity near Fallujah. A group of ISIL vehicles, including armed pick-up trucks and lorries, was identified and, having confirmed that there were no civilians or friendly forces in close proximity, the jets dropped a cluster of Paveway IV precision guided bombs on the vehicle group. A single truck appeared to survive the initial strike, but was accounted for by a Brimstone missile.

1 December - A Tornado GR4 patrol investigated a reported ISIL compound near Tal Afar in north-western Iraq and found a group of armoured personnel carriers. These were successfully attacked using Brimstone missiles. A further pair of Tornado GR4s came to the support of Iraqi forces engaged in a major firefight with ISIL near Tikrit. Two terrorist positions were identified and the precision of the Brimstone missile system allowed both targets to be engaged without risk to friendly forces. Meanwhile, an RAF Reaper remotely piloted aircraft on a separate patrol was able to attack 3 ISIL positions with Hellfire missiles. Another Reaper conducted a reconnaissance patrol in northern Iraq. Two ISIL positions and a vehicle were located by the Reaper’s crew, allowing coalition fast jets to conduct strikes on each in turn. The Reaper then identified a further ISIL position and engaged it with 1 of its own Hellfire missiles.