Introducing the IAF's "secret of youth"


While the price of new aircrafts is skyrocketing to unprecedented levels, the IAF manages to preserve its old planes and use them year after year. Introducing the IAF's "secret of youth"

The aircraft market, like many others, is becoming more and more expensive. The platforms and technologies continue to advance and reach prices countries cannot afford, a process that leads to a decrease in the development and the purchase of new planes.

The Israeli Air Force prefers to extend the life span of its aircrafts instead of buying new ones. While performing these extensions, the IAF is obligated to maintain the flight safety and operational relevance of its planes. Extending the life span of planes and improving their systems are some of the IAF's most exceptional capabilities, and a major contribution to its strength: While foreign air forces shut down their aircraft, the IAF operates its planes for years on end. How is this done?

Like Good Wine
The processes of extending the life span of an aircraft and improving its systems are different and completely separate from one another. Two units are in charge of these processes: the first is the aerial maintenance unit, which specializes in the body of the plane. The second is the IAF electronics unit, which deals with the electronic systems of the plane, which are considered the heart of the plane.

The process of extending the life span includes a general repair, aimed at ensuring that the plane flies safely for a few more years. This treatment includes the body of the plane, its mechanical components, the rotor head, and the wiring systems. On the other hand, the upgrade process is performed by both units. In order to adjust the aircraft to the current operational needs, the units install the latest military systems in the field of arming, self-defense, radar, communication, display and many more.

Live Long And Prosper
When the Israeli government purchases a new plane, helicopter or any other platform from the manufacturer, which is usually located in the US, it receives all the relevant information about it. Fighter jets are designed to fly for 30-40 years without the need for significant repairs, except routine maintenance and checkups.

"The manufacturer knows when the plane is expected to develop fatigue malfunctions and when parts of the plane become dangerous to use. Our aim is to understand the forecasts and to build an improvement plan to ensure safe flights and reasonable maintenance costs", says Colonel S', Commander of the Aerial Maintenance Unit. "Our planes and helicopters still have some of the original parts, because they work just fine. We can anticipate corrosion, cracks and other problems caused by fatigue, and deal with them before they become a safety hazard".

Up until the previous decade, it was customary to perform upgrades after 15-20 years, in order to refresh the operational systems and fix safety problems. Today, some aircraft go through a second or a third round, like the Sikorsky CH-53 helicopters, which are currently undergoing improvements to allow them to fly safely for many years to come. In the 90s, these helicopters went through the same process, which gave them the capability to continue to fly until today. This is, of course, only one example out of many.

Old Aircraft, New Challenges
The challenges that Israel faced in the years when most of the currently active aircraft of the IAF were purchased are completely different from the challenges it faces today. Large and fast fighter jets are being replaced with small, fast unmanned aerial vehicles (UAVs) with low RCS. In order for a plane that was built four decades ago to be able to perform missions relevant to modern warfare, it is necessary that it be upgraded significantly. And indeed, the IAF is constantly improving the capabilities of its aircraft. "The operational challenges of the IAF are very unique and its advanced electronic systems, which are mostly exclusive to the IAF, give it the needed advantages", says Colonel A, Commander of the Electronics Unit.

"Together with the many electronic upgrades we perform, the electronics world is advancing rapidly and the systems we install today may become too challenging or even irrelevant tomorrow, and therefore the unit must maintain a high level of professionalism". 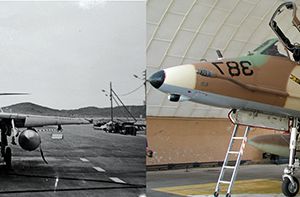