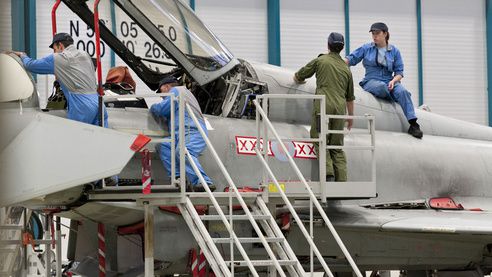 BAE Systems have been awarded a £112M contract by the UK's Ministry of Defence (MOD) to extend the Typhoon Availability Service (TAS) for the in-service support of the Royal Air Force’s (RAF) Typhoon fleet by 15 months.

The contract extension means the Company will continue to work alongside the RAF in meeting Typhoon’s operational requirements until early 2016. The extension will help to sustain around 650 jobs for BAE Systems’ personnel based at RAF Coningsby and RAF Lossiemouth supporting the Typhoon fleet.  Under the contract, BAE Systems is responsible for delivering Typhoon aircrew and ground crew training, maintenance of the aircraft, along with providing technical support and managing spares, repairs and logistics.

Nigel Davey, BAE Systems Director for Military Air Support said: “This agreement is a continuation of a strong partnership with the MOD and RAF to support its Typhoon fleet.

“Over the past six years we have worked hard to develop a service which ensures the RAF is able to meet its operational requirements while providing the best value for the UK’s taxpayers.

“BAE Systems is proud to support the fleet at RAF Coningsby, RAF Lossiemouth and in the Falkland Islands as it continues to perform its vital role in safeguarding our nation both at home and overseas.”

Defence Minister Philip Dunne added: “This contract will deliver vital aircraft maintenance to the RAF Typhoon Force, ensuring the availability of the Typhoon fleet to meet its operational commitments. The new contract incorporates best practice and lessons learnt during the first six years of service, improving the way the RAF is supported and making sure we can continue to keep the UK secure, both at home and abroad.

“Alongside recent announcements for weapon capability upgrades, this contract demonstrates our continuing commitment to maintain the aircraft’s status as a world class multi role combat aircraft of choice now and in the future.”

BAE Systems’ work on the TAS contract has delivered tangible savings for the MOD. For example, from 2013, through increased efficiencies and continued improvement in aircraft performance, the Company has been able to increase the amount of time between Typhoon’s maintenance intervals from 400 to 500 hours. This initiative followed a detailed analysis to ensure the changes could be implemented without compromising safety. The result of this change generated a saving to the MOD of more than £100M and has increased availability of the jets to the RAF.