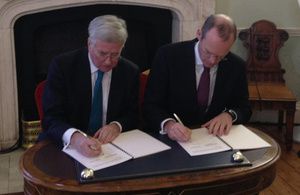 A Memorandum of Understanding between the UK and the Republic of Ireland has been signed to ensure greater defence collaboration in the future.

UK Defence Secretary, Michael Fallon, and his Irish counterpart, Simon Coveney, today signed a Memorandum of Understanding (MoU) between the UK and the Republic of Ireland to ensure greater defence collaboration in the future.

The visit marked a historic moment for both countries, with Defence Secretary, Michael Fallon, being the first UK Defence Minister ever to make an official visit to Ireland.

The signing of the MoU represents a major step forward in the process of formalising the already broad and strong relationship the UK and Ireland have, recognising the 2 countries’ shared interests, values and responsibilities.

The MoU will provide both the UK and Ireland with a means for developing and furthering their already excellent defence and security relations and will help to enhance cooperation in exercises, training as well as peacekeeping and crisis management operations.

Examples of the UK and Irish Armed Forces already working together include during peacekeeping missions in Mali during 2013, and more recently, alongside each other in Sierra Leone, where the UK is leading international efforts to halt the spread of the Ebola Virus.

I welcome today’s opportunity to sign the Memorandum of Understanding with Ireland.
It very much reaffirms our resolve to build on and strengthen the existing strong links between the Armed Forces of Ireland and the UK.
Looking to the future, this agreement will importantly help us both to improve our defence and security cooperation, including conflict prevention and crisis management.