Connexion + Créer mon blog
<< US negotiating with Spain... Australia and the US order... >>

Ukrainian Armed Forces to use AN-70 military transport aircraft 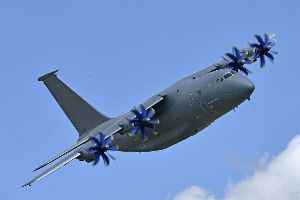 The AN-70 is designed for aerial delivery and air transportation of troops and tangible assets, among other missions. Photo Antonov.

The Ukrainian Ministry of Defence (MoD) has signed an order to induct the AN-70 medium military freighter aircraft into service.

The decision is reportedly based on results obtained from joint state tests of the AN-70 and allows Antonov to start serial production of the aircraft and develop different modifications.

Powered by four Ivchenko Progress D-27 three-shaft propfan engines, the AN-70 is a short take-off and landing aircraft, and can be used for aerial delivery, air transportation of troops and tangible assets, as well as the provision of manoeuvres and troop activity.

Ukrainian Armed Forces state scientific test centre test pilot Mr Pakholchenko said: "The AN-70 is easy to be piloted at all difficult flight areas, including short take-off and landing.

Antonov president general designer Mr Kiva said the company performed a modernisation of the AN-70 board equipment and power plant, before the final stage of joint state tests.

Developed as the AN-70T, AN-70TK and AN-112KC, the aircraft is scheduled to replace the Ukrainian military's obsolete AN-12 military transport aircraft fleet.

To date, Ukraine has received two AN-70 prototypes.

In addition to the Ukrainian Armed Forces, the aircraft has been ordered by the Russian Air Force. Volga-Dnepr has also signed a memorandum of understanding to purchase up to five commercial-standard AN-70Ts, as reported by Flightglobal.