Armor: Poland Produces Their Own APFSDS 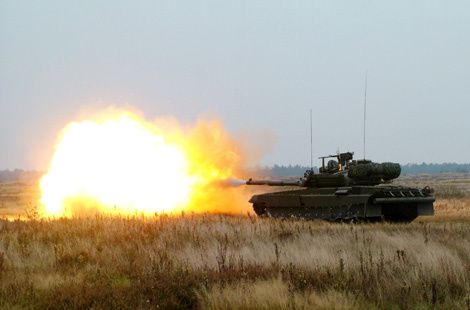 Poland has ordered 13,000 120mm APFSDS (Armor Piercing Fin Stabilized Discarding Sabot, for smooth bore guns) tank gun shells from a local manufacturer for delivery by 2017. These are for Poland’s recently acquired forces of 237 second hand German Leopard 2 tanks. Poland bought some German APFSDS shells initially, but since the Cold War ended Poland has been producing APFSDS for the 125mm guns used by its T-72s, which the Leopards are replacing. Polish ammo plants will buy new manufacturing equipment to produce the 120mm APFSDS but will be able to build the shells at lower cost, and comparable quality to other nations and thus be able to grab some export business. Poland still has some locally upgraded T-72s (the PT-91) and continues to manufacturer 125mm APFSDS for these.

Most modern 120mm tank guns fire a shell that uses a smaller 25mm “penetrator.” The 25mm rod of tungsten (or depleted uranium) is surrounded by a “sabot” that falls away once the shell clears the barrel. This gives the penetrator higher velocity and penetrating power. This is the most expensive type of 120mm shell and already comes in several variants. There is APDS (Armor Piercing Discarding Sabot) and APFSDS (Armor Piercing Fin Stabilized Discarding Sabot, for smooth bore guns). The armor piercing element of discarding sabot rounds is less than half the diameter of the shell and made of very expensive, high density metal. Its smaller size enables it to hit the target at very high speeds, up to 1,900 meters (5,900 feet) a second. This is the most common type of anti-tank shell and is constantly being improved. Thus in the 1970s depleted (nonradioactive) uranium was introduced by the U.S. to replace the slightly lighter tungsten penetrators. The depleted uranium penetrators were more effective.

About twenty armies now have 120 mm and 125mm smoothbore guns which can obtain slightly more penetrating power using depleted uranium instead of tungsten. While composite armor was developed to defeat APDS but it was not always successful. HEAT (High Explosive Anti Tank) rounds have fallen from favor because their success depends on hitting a flat surface on the tank. Modern tanks have few flat surfaces. On the plus side, HEAT shells must be fired at lower speeds, are good at any range, and many are now built with a fragmentation capability to make them useful for anti-personnel work. The AP type shells are less effective at longer ranges. Similar to HEAT, more expensive and still in use, is the HESH (High Explosive Squash Head) shell. This item hits the tank, the explosive warhead squashes, and then explodes. The force of the explosion goes through the armor and causes things to come lose and fly about the inside of the tank (the spall effect). The vehicle may appear unharmed, but the crew and much of its equipment are not. Works at any range but is somewhat defeated by spaced and composite armor.

Then there is the controversy over the health issues associated with depleted uranium, which is a metal that is one of the heaviest known. It is very effective at punching holes through enemy tanks. It is so named because all the harmful radiation has been "depleted" from it as a by-product of manufacturing nuclear fuel.  But because it's still considered a "nuclear" material it is controlled by the U.S. Nuclear Regulatory Commission. In effect, these anti-tank shells are technically "nuclear weapons." U.S. export laws had to be changed to allow the export of depleted uranium ammo.

Early on there were rumors that depleted uranium created dangerous levels of radiation when handled or used. In reality, depleted uranium is no more toxic than tungsten and other heavy metals. It is true that when depleted uranium penetrators go through armor, and come under enormous stress, they do produce brief, but high, bursts of radiation. This seems to be because a chunk of depleted uranium will absorb most of the radiation it produces through normal decay, which it cannot do once shattered. However, it is unlikely that the resulting "pulse" of radiation will cause injury or illness, particularly given the damage produced by the explosive effect and shell fragments inside a vehicle hit. The Poles don’t have any depleted Uranium, so they will be using tungsten.