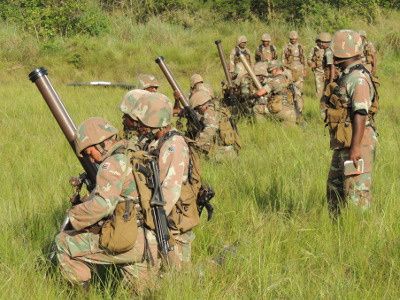 The exercise was originally set to take place in Lesotho last October but was put on hold due to changes in the mountain kingdom’s political situation. The AU said at the time it hoped to stage the exercise in South Africa in March 2015.

A joint communique issued earlier this month by the AU/UN following a joint task force (JTF) meeting of the two bodies in Addis Ababa said South Africa will at some time this year host the Amani Africa ll field training exercise.

Joint Operations Captain (SAN) Jaco Theunissen told defenceWeb the exercise would take place in October and “the most likely venue” would be the SA Army Combat Training Centre at Lohatla in the Northern Cape.

“This is not cast in stone and depending on the requirements decided on for the exercise the location could change to another with infrastructure more suitable for the scenario,” he said, adding the exercise dates would also be finalised during the five day planning session in Thaba Tshwane.

Last year the SA National Defence Force’s annual force preparation exercise Seboka at Lohatla took on a different image when it became South Africa’s most visible training preparation yet for the African Capacity for Immediate Response to Crises (ACIRC), a standby force to serve until such time as the long-awaited Au African Standby Force (ASF) can be mobilised and deployed.

Indications are the South African exercise will focus on airlift and communication capabilities to and from AU headquarters in Addis Ababa. There are also expected to be smaller tactical exercises with objectives put to troops on the ground during which command and control of forces as well as inter-operability between forces from different countries will be tested.

The phrase “Amani Africa” means “peace in Africa” in Kiswahili and is the over-arching name given to exercises aimed at developing the ASF to full operational capability.