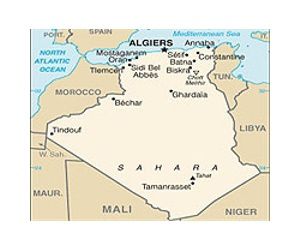 Algeria has offered to host peace talks for the mess in Libya, as has neighboring Morocco. So far this year Libyan factions have held negotiating sessions in both countries, but no peace deal has yet been agreed to. Despite the appearance of ISIL (Islamic State in Iraq and the Levant) in Libya Algeria and most Western nations (especially the EU) still see a negotiated settlement as the best way to deal with the Libya civil war. The Libyan Tobruk (officially recognized by the UN) government goes along with this, mainly because they cannot afford to annoy the UN and risk losing international recognition as the legitimate government.

While the government continues to call for an “Algerian solution” to the chaos in Libya, less well publicized are the details of how Algeria achieved that solution. Algeria finally got a political deal with its surviving Islamic terrorists only after a decade of horrific violence. Because of all that slaughter Islamic radicalism lost most of its popular appeal by the late 1990s. This came after Islamic terrorists organized a rebellion earlier in the 1990s and murdered over 100,000 civilians who did not agree with them (or enthusiastically aid them). That bloodbath ended in 2005 with an amnesty deal that attracted most of the remaining Islamic terrorists. Some of the Islamic terrorists still operating in Algeria seem to acknowledge that connection and avoid further antagonizing civilians with the kind of mayhem still popular in places like Libya, Iraq and Syria. Despite the 2005 peace deal there still about a hundred armed Islamic terrorists killed in Algeria during 2014. So far this year it appears that number will be lower for 2015.

The increased Algerian border security, especially on the Mali and Libyan borders has led to more arrests, but almost all of those caught are smugglers, not Islamic terrorists. Most of the smugglers are moving consumer goods (cheap fuel, expensive alcohol, gadgets and low level drugs like cannabis, for use in Algeria) and illegal migrants headed for Europe. More valuable shipments like drugs headed for Europe (cocaine and heroin), precious metals (usually gold), illegal weapons (especially large quantities of explosives, RPGs and assault rifles), illegal migrants (who can afford to pay high fees) and known Islamic terrorists are rarely caught. This shows that these cargoes are relatively rare compared to food, fuel, consumer goods  and people smuggling and that many of the high-end smugglers who move these expensive items still have their arrangements with border security commanders to allow those who can pay large bribes to get through without interference. The border guards have incentives to catch smugglers as they get some of the value of the seized vehicles (usually expensive all-terrain models) and cargo as well as bribes from smugglers carrying items (like cocaine or hashish headed for Europe) that will not cause a unwanted publicity (about lax border security) inside Algeria.  Weapons are often carried by smugglers for self-defense against bandits, but the border guards make a big deal out of each arrested smuggler caught with self-defense weapons as being an “arms smuggler.” The increased border security effort has become a major problem for the low-end smugglers who have had to find new smuggling routes as the traditional ones (some used for centuries) are now patrolled by aircraft and troops on the ground. Because of the Islamic terror threat the government has made it more difficult for the smugglers to bribe their way past the security forces, which has simply led to higher bribes being paid by those (like Islamic terrorist groups that dominate drug smuggling in the region) who can afford it. The low value smugglers still get through, but in fewer numbers and via more difficult routes. The security forces are still detecting or arresting Islamic terrorists in the south and north who got smuggled in successfully or were recruited locally. Most of the smugglers arrested are not Algerians although Algerians tend to be the most common nationality found to be involved.

March 12, 2015: A court sentenced a blogger to six months in jail for posting a 2012 comment that the army considered insulting. The prosecutor wanted a ten year sentence and the accused was released after the trial because he had already been in jail awaiting trial for seven months. The blogger showed no regret for what he had done and the trial divided the country with many Algerians believing the government had gone too far in this case.

March 11, 2015: In the capital two days of UN sponsored peace talks between the major factions in the Libyan civil war ended with sweet words and eagerness to keep talking, but nothing that would end the fighting. The Libyan factions did admit that these talks are not just an effort to bring back peace and prosperity but also a matter of survival. The appearance of ISIL (Islamic State in Iraq and the Levant) in Libya has caused thousands of the more fanatic Islamic terrorists to sign in as affiliates of this highly destructive and uncompromising group. This has not created a united ISIL force and ISIL appears to spend most of its time raiding and looting just to get fed and resupplied with fuel and ammo. There are still organized Islamic terrorists groups fighting government (both Tripoli and Tobruk) forces but there is less of that because of the need to find something to eat.

March 10, 2015: Three Islamic terrorists were killed (and weapons and ammo seized) in a clash with soldiers 145 kilometers west of the capital.

March 1, 2015: Troops ambushed Islamic terrorists near Beni Douala (95 kilometers east of the capital) and killed one of them.

February 28, 2015: In the south (near Tamanrasset, 2,000 kilometers south of the capital) 40 policemen were injured while dealing with hundreds of young Tuareg men violently demonstrating against government attempts to drill exploratory shale oil wells in the desert area. The Tuareg (the southern branch of the Berbers) are the majority in this thinly populated area and fear that the fracking process required to recover the oil trapped in shale rock will pollute the limited local water supply. In addition to fighting with police the protestors burned down the home of the local mayor. The Tuareg are nomads and their language and genetic makeup are similar to the Berbers. Most Algerians are genetically Berber but only about 20 percent of Algerians are culturally Berber and about 15 percent of these Berbers are Tuareg living down south. Although the Berbers are largely farmers and urban dwellers living along the coast most Tuareg are still nomads (or consider themselves such). Over two thousand years of invasions and conquests by foreigners has resulted in most Algerians becoming culturally Arab. These cultural differences are often a source of conflict. Genetic studies have shown the Tuareg to be more Berber than those in the north, apparently because there was less intercourse with invaders. During the ice age (and until a few thousand years ago) the Sahara was a well-watered plain where the ancestors of the Berbers and Tuareg were dominant. As the area turned to desert after the last ice age ended 12,000 years ago many of these people fled to the Nile River and became the ancient Egyptians.

February 24, 2015: In Tunisia security forces arrested over a hundred Islamic terrorism suspects after uncovering an ISIL plot to launch numerous attacks inside Tunisia. That sort of violence has few fans in Tunisia and many locals willing to call the police with reports of suspicious behavior.

February 18, 2015: In neighboring Tunisia four policemen were ambushed and killed by Islamic terrorists near the Algerian border in the Chaambi Mountains. This was the first such Islamic terrorist activity in this area this year. Police assured the public that they would hunt down and find the attackers.

February 16, 2015: The fifth round of peace talks began in Algeria between the Mali government and an alliance of six northern rebel groups. This round of talks featured the personal participation of the Mali prime minister for the first time. These talks have been making slow progress because of the reluctance of the majority of Malians (black Africans in the south) to grant the degree of autonomy the lighter skinned Arab and Tuareg minority in the north want. Getting the Mali prime minister personally involved is seen as a step forward but there is still no final agreement.  After three days of negotiations there was still deadlock but the Tuareg rebels agreed to an immediate ceasefire to halt the fighting that has been going on for weeks.

February 14, 2015: In the northeast troops killed an Islamic terrorists near the Tunisian border.

February 13, 2015: Soldiers searching for terrorists about 100 kilometers southeast of the capital found and destroyed twelve structures (some of them fortified) along with twenty bombs and grenades as well as some electronic equipment. Also found was the decomposing body of a man later identified as a wanted Islamic terrorist leader.