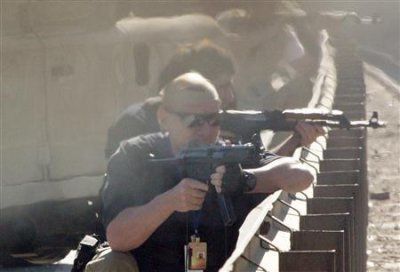 Foreign private security personnel from South Africa, Russia and South Korea are on the ground in northeast Nigeria to train Nigerian troops and are not engaged in frontline combat against Boko Haram, the government said on Tuesday.

According to security and diplomatic sources, Nigeria has brought in hundreds of mercenaries to give its offensive against the Islamist militant group a shot in the arm ahead of the March 28 presidential elections.

But government spokesman Mike Omeri said foreigners on the ground were only engaged in training Nigerian troops.

"There are trainers on the ground to assist in the handling of equipment," Omeri told Reuters on the sidelines of a news conference in London. "They simulate, they teach. These are the things they do."

Asked if they were directly involved in fighting, he said: "I am not aware of that."

Africa's most populous nation and top energy producer has been plagued by the Boko Haram insurgency since 2009, when insurgents intensified efforts to establish an Islamic caliphate in the northeastern Borno state.

However, this year Nigeria and its neighbours have launched a series of offensives to recapture territory, turning the tide against Boko Haram in the run-up to the hotly contested presidential poll.

Omeri would not confirm how many foreigners were involved but said they had come from the same countries that had provided military equipment. He cited South Africa, Russia and South Korea.

"Acquisition of recruitment and military hardware is done through a number of processes. There are government-to-government exchanges and there are those who also come through contractors," he said.

The contractors' stay in Nigeria would end when local troops had become proficient at handling the equipment, he added.

"This is training on site and maybe this is why the people on the ground have been described as mercenaries."

He declined to predict how long it would take for the military to regain full control.

"We have started the final onslaught," he said. "This is the road to the finish and we are on it already."