Italy Produces First F-35 Outside US 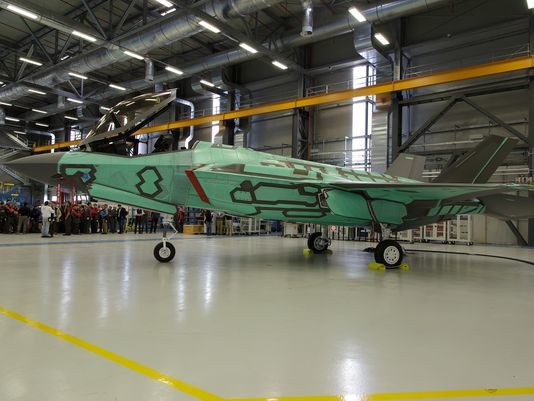 The first F-35A aircraft built in Italy, AL-1, which will also be the first of the jets operated by the Italian Air Force, prepares for its roll out from the Cameri, Italy, final assembly and check out facility.(Photo: Larry Bramblett/Lockheed Martin)

ROME — The first joint strike fighter assembled outside the US rolled off an assembly line in Italy on Thursday, Lockheed Martin said in a statement.

The aircraft, designated AL-1, was the first of eight aircraft being assembled at the final assembly and check out (FACO) facility at Cameri Air Base in northern Italy. AL-1 is due to fly for the first time later this year, Lockheed Martin said.

Italy is assembling its F-35s at Cameri, currently an order of 90 aircraft, and will assemble Dutch aircraft as well. The facility is also being used to build wing sets under contract to Lockheed Martin. The first wing section has been completed and is due to be shipped to Lockheed's Fort Worth, Texas, F-35 production line for final assembly.

Owned by the Italian Ministry of Defense, Cameri is operated by Italian firm Alenia Aermacchi and Lockheed Martin, with 750 staff now based at the 101-acre facility, which includes 22 buildings and over a million square feet of covered workspace.

Last December, the site was chosen by the DoD as Europe's F-35 airframe maintenance, repair, overhaul and upgrade center, which should guarantee work for Cameri after Italy's jets have been assembled.