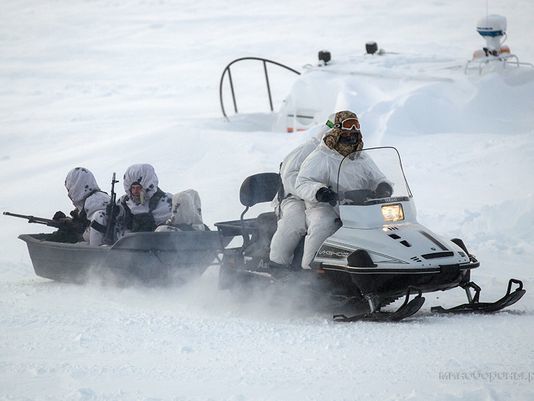 MOSCOW — In order to secure its large swath of the resource-rich Arctic, Moscow has created a new Northern Command structure under which ground, sea and air units are being deployed to reopened Soviet-era bases along Russia's northern frontier.

The Soviet Union maintained a formidable presence in the Arctic. It established a stretch of air bases for long-range strategic bombers and radar stations and anti-air batteries to keep American bombers at bay.

With the Arctic becoming increasingly contested, and Russia's economy continuing its deep dependence on resource exports, Moscow has been beefing up its military presence in the region to assert control over as much territory as it can, reopening old Soviet bases and constructing new ones.

"These efforts cannot be explained by any requirements that exist today or will arise in the near future," Anton Lavrov, an analyst at the Moscow-based Center for the Analysis of Strategies and Technologies wrote in Moscow Defense Brief, the center's monthly publication.

"Russia is not facing any direct military threats from the north. Its military buildup in the Arctic pursues long-term goals rather than any immediate objectives," he added.

The flagship project of Russia's Arctic pivot was President Vladimir Putin's announcement of April 2014 that a new Arctic command structure would be established to coordinate every military unit operating in the theater.

This command went live on Dec. 1, and is known as the Northern Joint Strategic Command.

Built upon the foundation of the Russian Northern Fleet, which was liberated from the Western Military District for the Northern Command, the new command will operate out of Murmansk and already wields a sizable naval force.

The Northern Fleet, with its long history of operating in the hostile waters of the Arctic, allows Russia to establish a presence in the region. It has a substantial fleet of surface ships and submarines, about 40 each. However, Dmitry Gorenburg, an expert on the Russian Navy at the Virginia-based CNA Corp., said that anywhere from 40 to 70 percent of those vessels are no longer operational.

Still, it is able to conduct about five deployments in the Arctic a year with its flagships — the Admiral Kuznetsov aircraft carrier and Pyotr Veliky battle cruiser — two Udaloy-class destroyers, five corvettes of the Grisha and Nanuchka class, two Ropucha-class landing ships and five smaller ships, according to Gorenburg.

These forces are backed up by a wing of naval aviation aircraft, such as Su-33 carrier-based fighters and land-based recon, anti-submarine and communications relay aircraft and helicopters.

No naval combat vessels are currently being built for Arctic-specific duty, Gorenburg said. However, the Navy's new Admiral Gorshkov frigates, which will serve with the Northern fleet, will be used for Arctic patrols, but will require icebreaker support beyond the summer months.

Gorenburg said that in terms of concrete plans for expansion, most of the sea-based action is focused on the Coast Guard, a key piece of infrastructure if Moscow is going to successfully commercialize the North Sea route.

"For the Northern operations of the Coast Guard of the Border Guard Service, large Project 22100 border patrol ships with a standard displacement of 2,700 tons are being built," said Mikhail Barabanov, a Russian navy and military expert at CAST.

"The first ship, PolyarnayaZvezda, was launched at the Zelenodolsk plant in May 2014.

The Soviets built a large fleet of icebreakers, Gorenburg said, but most are set to retire in the early 2020s. "They have to basically rebuild their entire icebreaker fleet," he said. Russia plans on building three nuclear icebreakers and four diesel-powered.

Russia is focused on equipping not just sea units; the Arctic ground forces are being overhauled as well, though their operations will be intimately tied with the naval and air aspects of the Arctic command structure.

Russia's new Arctic forces will be stationed at three new bases that can house up to 5,000 troops, built using prefabricated modules akin to those found at Antarctic research stations.

The military also is constructing airbases to house interceptors, strategic bombers and other aircraft. From the Soviet-era, only six airbases remained active from a formidable network of 12. The six deactivated bases are being restored and upgraded, and a brand new airbase is being built in the New Siberian Islands.

Meanwhile, 10 air-defense radar stations are being built to help defend against enemy bombers.