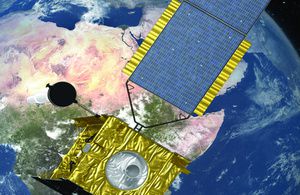 The UK will move one of its communication satellites to the Asia Pacific region for the first time to deliver protected and secure satellite communications services.

Defence Minister Philip Dunne confirmed at the Langkawi International Maritime & Aerospace (LIMA) exhibition in Malaysia, that Airbus will reposition one of the Skynet 5 satellites, providing the UK with secure communications and a greater ability to support regional humanitarian and peacekeeping operations.

As part of a multi-million pound investment, Airbus Defence & Space – which operates the satellite on behalf of the UK Government – will also build a ground station in Australia. The move represents significant export opportunities for the UK as any spare communication capacity will be sold.

Today’s announcement that Airbus will be moving one of the UK’s Skynet 5 satellites to the eastern Asia-Pacific region is clear proof of how much our relationships with our international allies matter.

This is the first time that we have had a secure communications capability in the region, and shows the depth of our commitment to our allies and partners in the region, including Malaysia, in humanitarian and peacekeeping operations.

The Skynet 5 is a private finance initiative contracted to Airbus Defence & Space, who own and operate the Skynet 5 secure communications satellites and the ground network which provide all Beyond Line of Sight (BLOS) communications to the UK Ministry of Defence.

As part of the contract, NATO and other allied governments are able to use Skynet services to augment their existing communication services. It is intended that the Skynet satellite will be in position by the middle of 2015.

A range of world leading British technologies are being exhibited at LIMA as the United Kingdom looks to strengthen industrial ties with Malaysia in the defence and security sectors.