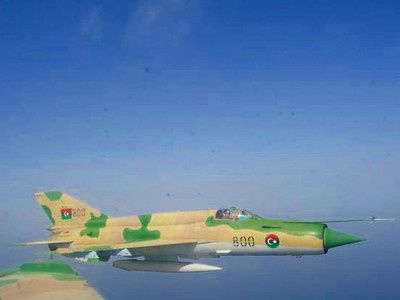 A new United Nations Panel of Experts report on the Libyan arms embargo has singled out the Sudanese and Egyptian governments as being among the top foreign arms suppliers accused of fuelling the Libyan civil war through the transfer and sale of small arms, ammunition and aircraft to the government and rebel militias.

It says although the UN allows the sale of weapons to Libya subject to approval by the Security Council, an analysis of transfers done between 2011 and August 2014 shows that most deals violated the arms embargo as the parties never sought UN permission for sales.

"Analysis of all such notifications shows that large quantities of materiel were subject to the notification process, including more than 60 000 handguns, 65 000 assault rifles, 15 000 sub-machine guns and 4 000 machine guns of various calibres, as well as more than 60 million rounds of ammunition for small arms and machine guns (9x19 mm to 14.5 mm).

"However, in the absence of any post-delivery notification system until recently, it is difficult to assess how much notified materiel has actually been transferred to Libya," the report says.

The report notes that neighbours Sudan and Egypt have escalated the supply of military equipment to opposing sides since the outbreak of full-scale civil war in May last year: "Interviews with Libyan officials, representatives of intelligence services and diplomats indicate that Egypt has been supporting the House of Representatives in Tobruk, including through the transfer of military materiel to Karama (militias) and/or the Libyan army. In addition, the Panel noted a statement by a Pentagon spokesperson and media reports regarding the involvement of Egypt in airstrikes operated in Libya in August 2014," reads part of the report.

The panel said confidential sources in Libya also confirmed the offloading of a large quantities of Egyptian-sourced small arms, ammunition and light weapons by an Egyptian vessel which docked in the military section of the port of Tobruk sometime in October last year.

Another convoy of Egyptian military supplies is reported to have entered Libya by road in the third week of September 2014. The panel said despite denials from the government in Cairo, it has evidence which proves that the Egyptian Air Force has transferred at least two Mi-8 helicopters and some refurbished MiG-21 fighter jets to the Tobruk-based Libyan government faction.

"A number of new aircraft are in use in the Libyan air force, including some whose features appear to be consistent with aircraft used by the Egyptian air force, such as some MiG-21MF aeroplanes and a Mi-8 helicopter. For example, the identity features of the Mi-8 helicopter were obviously concealed on purpose and painted over, but the locations of these exactly match those of Egyptian aircraft.

"The Panel wrote to Egypt asking whether Egypt had ever transferred the Mi-8 helicopter to Libya. In its response, Egypt stated that it had not provided Libya with any Mi-8 helicopters nor any MiG-21MF aeroplanes. However, the Panel concludes from the analysis above that this Mi-8 helicopter is originally from the Egyptian fleet," the report says.

The UN said Sudan remains the principal supplier of military materials and weapons to the Fajr Libya militant group, a pro-government militia which has controlled Mitiga airport since the revolution.

"Since the outbreak of the conflict in 2014, the Sudan has been transferring military materiel to Libya in violation of the arms embargo. Interviews with knowledgeable Libyan and foreign sources indicate that the Sudan has been supporting armed groups aligned with Fajr Libya, including through the transfer of military materiel by air to Mitiga airport. The arrival of a Sudanese Air Force C-130 aircraft was reported on several occasions on social media platforms during the past six months (June to December 2014)," the report said.

Libyan air force aircraft are alleged to have made numerous trips to from Sudan to the Mitiga airport carrying military supplies. In addition, Sudan is also accused of transferring an unknown number of Mi-24 helicopters to the Libyan Air Force. The report also accused the Qatari government of heavy involvement in the Libyan civil war through the provision of weapons, financial and logistical support to anti-government militias.

The panel said it is presently investigating allegations that a military aircraft from the Middle Eastern nation delivered an unknown consignment of goods in late 2014 but the lack of government co-operation is stalling investigations. The report also accuses Turkey of supplying arms, ammunition and financing to anti-government armed groups.

The panel noted that most of the material was seized on arrival at Tripoli International Airport by militia brigades while some of the deliveries appear to have been made directly to autonomous armed groups. Belarus is also accused of delivering part of the consignment directly to the Zintan brigades militia on February 6, 2014.

The report also notes the November 2014 seizure of a Ukrainian cargo vessel in Greece after it was found to be loaded with more than 32 million rounds of ammunition for assault rifles and machine guns for delivery to the government forces in Tripoli.

According to the report, EU Border Assistance Mission to Libya (EUBAM) lost 70 handguns, 23 assault rifles and more than 42 000 rounds of ammunition when militias ransacked its headquarters at Tripoli International Airport in April last year.

The report said most of the weapons which were delivered to Libya have made their way to Tunisia, Egypt, Algeria and parts of the Maghreb where they have considerably increased the military capabilities of militant groups.

Among other recommendations, the panel said the UN Security Council should consider setting up a special maritime taskforce to operate on Libyan waters if the implementation of the arms embargo is to succeed.