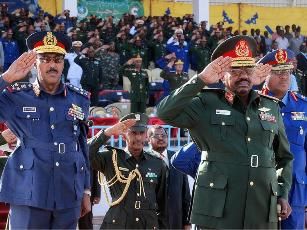 According to a statement released by the Sudanese Armed Forces, al-Bashir saluted Air Force service members on their efforts to support operation Decisive Storm and that they are bombing Houthi targets and patrolling the Yemeni skies.

Sudan's participation with four Su-24 "Fencer" supersonic precision bomber aircraft was confirmed on Tuesday as images of the planes prepped on the tarmac of the King Khalid Air Force Base appeared in videos released by the coalition command.

The statement released Wednesday by the Sudanese Armed Forces, however, did not specify the type of mission the Fencers conducted.

Coalition spokesman Brig. Gen. Ahmad al-Assiri Wednesday did not confirm or deny the participation of the Sudanese Air Force in strikes. Yet coalition member United Arab Emirates stated on its news agency WAM that it participated in sorties targeting Houthi groupings in Yemen on Tuesday.

The Sudanese Air Force acquired 12 Su-24 aircraft from Belarus in 2013, according to the Satellite Sentinel Project, which follows development of Sudanese armed forces operations in Darfur.

The aircraft have been modified to the Su-24M export model by Belarus, according to the end-user certificate issued, and are fitted with two external fuel pods that would extend the range and loiter time over a target area.

The operational range of the Fencer is a little over 600 kilometers.