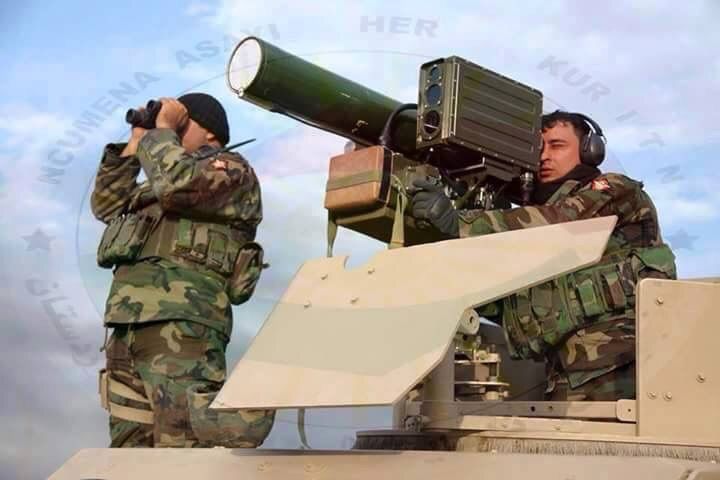 Kurdish forces fighting in Iraq and Syria have been seen using the Chinese HJ-8 ATGMs (Anti-Tank Guided Missiles). This is the Chinese version of the American TOW (Tube-launched, Optically tracked, Wire-guided) system has been in service since 1970. Over 500,000 TOW missiles have been manufactured since its introduction and it remains in service with the United States and many other countries. All versions of TOW are shipped and fired from a sealed launch tube. That tube is placed on a MGS (Missile Guidance Set) that contains the gunner sight, with night vision, and operator guidance electronics. The MGS weighs 25 kg (55 pounds). The 1970 version of the missile weighed 19 kg (42 pounds) and had a 3.9 kg (8.6 pound) warhead. The latest version (TOW 2B or BGM-71F) weighs 22.7 kg (50 pounds) and has a 6.2 kg (13.5 pound) warhead that can defeat ERA (Explosive Reactive Armor) at targets up to 4,000 meters away.

The HJ-8 is nearly identical to TOW 2 in size, weight, range and, according to the Kurds, performance. Both TOW and HJ-8 use SACLOS (semi-automatic command line-of-sight) guidance. This system works by having the operator hold the target in the MGS sights and the missile will be guided to the target via wires that connect the missile to the launcher. The big problem is that the operator is often under fire and that sometimes makes it difficult to maintain aim. The next generations of anti-tank missiles were wireless and “fire-and-forget” which allows the operator to duck as soon as the target is identified by the MGS and the missile fired. Nearly all ATGMs use shaped-charge warheads that penetrate most tank armor and are also effective against structures and unarmored vehicles.

The Kurds have a hard time getting weapons from the Iraqi government (because of disputes over control of oil and corruption in the Shia Arab dominated government) and have sought weapons from all available sources. Chinese weapons are widely available in the international black market for arms. If you have the money, there are groups that can get you all sorts of relatively cheap and pretty effective Chinese weapons, which are often pretty good copies of Western and Russian weapons.