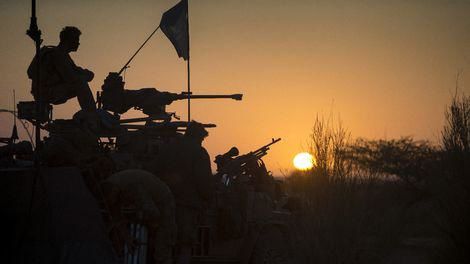 
From Mali, one Dutch Special Operations force commando tells his story. His perspective. His mission.

► ► EPISODE 1 "NO MAN'S LAND" ◄ ◄
We introduce our commando in Mali. He scouts the area for the United Nations and comes into contact with rebels. The atmosphere is tense, yet he manages to obtain new information about the location of the rebels. Everything points to the Tilemsi valley. It is a kind of a no-man’s land, in the proximity of Kidal.

DIARY OF OUR HEROES ► COMMANDO IN MALI
Who or what is a Special Forces commando? For once, the mystery surrounding the elite unit of the Dutch army is replaced by the real story. For the first time we experience what a real commando sees, does and thinks. During the UN peacekeeping mission MINUSMA in Mali, one commando kept a video diary. This commando, who filmed everything from his point of view, gives the viewer a unique glimpse into the life of a commando on mission in the eight-part series “Dagboek van Onze Helden – Commando in Mali”.

► THE DUTCH MISSION IN MALI
Since April 2014, the Dutch Special Operations Forces are operating in the dessert of the African country Mali. Mali is likely to be a breeding ground for terrorist organizations. For this reason, UN peacekeeping mission MINSUMA was conceived.

The Dutch Special Operations forces form the 'eyes and ears' of this mission. The commandos gather intelligence and investigate where battling parties are located. That is not without danger. Attacks with homemade bombs, ambushes and raids are part of the daily threat. With the Dutch findings and intelligence further operations are considered. This makes the Dutch contribution very important and unique.