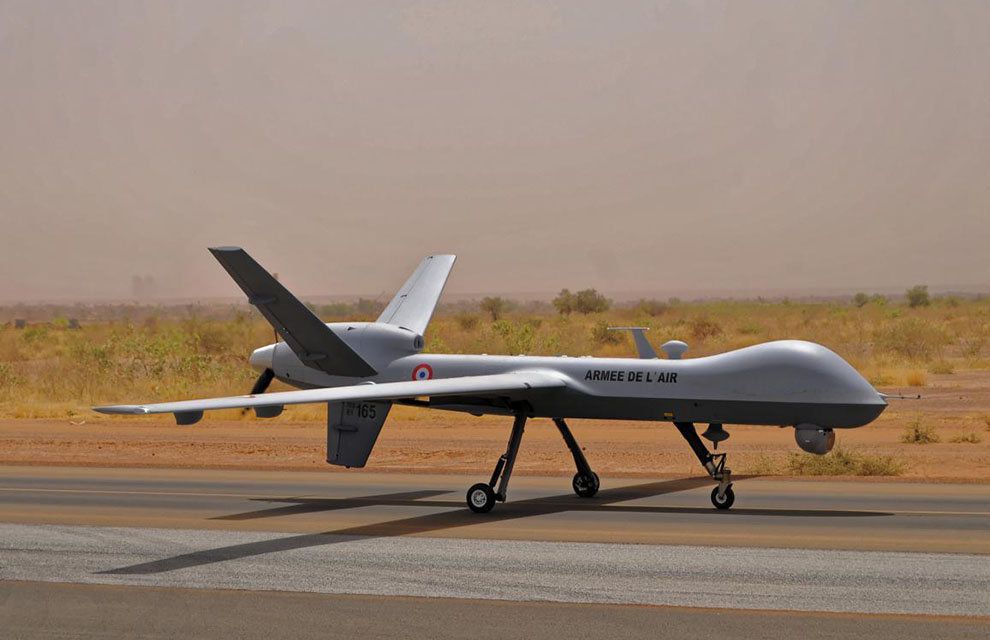 France recently received its third American RQ-9 Reaper UAV. The first two were ordered in 2013 and in service by early 2014. Pleased with Reaper performance France has ordered a dozen and expects all of them to be in service by 2019.

Back in 2013 France decided that its locally developed Harfang UAV was not sufficient and decided to try out the Reaper. As expected the Reaper performed as well as other NATO users had reported and soon the initial order was increased to twelve. In 2013 two Harfang UAVs were in Mali (operating from neighboring Niger) and some American RQ-9s are helping out as well. France wanted the RQ-9s as quickly as possible and apparently this sale was dependent on the U.S. being able to deliver the RQ-9s before the end of 2013. That was accomplished and the two French reapers were in service by January and were soon in Africa.

The Harfang was based on the Israeli Heron Shoval UAV, which in turn is very similar to the MQ-1 and is selling well to foreign customers who cannot obtain the MQ-1. In addition to being one of the primary UAVs for many armed forces (Israel, India, Turkey, Russia, France, Brazil, El Salvador), the United States, Canada, and Australia have either bought, leased, or licensed manufacture of the Heron. France bought four Harfang ("Eagle") UAVs and used them in Afghanistan, Libya, and Mali since 2009.

The Shoval weighs about the same (1.2 tons) as the Predator and has similar endurance (40 hours). Shoval has a slightly higher ceiling (10 kilometers/30,000 feet, versus 8 kilometers) and software which allows it to automatically take off, carry out a mission, and land automatically. Not all American large UAVs can do this. Both Predator and Shoval cost about the same ($5 million), although the Israelis are willing to be more flexible on price. Shoval does have a larger wingspan (16.5 meters/51 feet) than the Predator (13.2 meters/41 feet) and a payload of about 137 kg (300 pounds). The French version costs about $25 million each (including sensors and development costs).

Israel also developed a larger version of the Heron, the 4.6 ton Heron TP. This is similar to the American RQ-9, but with a lot less combat experience and more expensive. Some Heron TP tech was incorporated into Harfang and France was going to buy some Heron TPs, even though MQ-9s were offered for more than 20 percent less. France analyzed the situation and decided to switch to the RQ-9 because they are seen as more reliable and capable as well as possessing lots of combat experience.

The Heron TP entered squadron service in the Israeli Air Force four years ago. The UAV's first combat service was three years ago, when it was used off the coast of Gaza, keeping an eye on ships seeking to run the blockade. For that kind of work the aircraft was well suited. But so are smaller and cheaper UAVs. Development of the Heron TP was largely completed in 2006, mainly for the export market, and the Israeli military was in no rush to buy it. There have been some export sales and the Israeli air force eventually realized that this was an ideal UAV for long range operations or for maritime patrol. But it turned out there were few missions like that. Equipped with a powerful (1,200 horsepower) turboprop engine, the Heron TP can operate at 14,500 meters (45,000 feet). That is above commercial air traffic and all the air-traffic-control regulations that discourage, and often forbid, UAVs fly at the same altitude as commercial aircraft. The Heron TP has a one ton payload, enabling it to carry sensors that can give a detailed view of what's on the ground, even from that high up. The endurance of 36 hours makes the Heron TP a competitor for the U.S. MQ-9. The big difference between the two is that the Reaper is designed to be a combat aircraft, operating at a lower altitude, with less endurance, and able to carry a ton of smart bombs or missiles. Heron TP is meant mainly for reconnaissance and surveillance, and Israel wants to keep a closer, and more persistent, eye on Syria and southern Lebanon. But the Heron TP has since been rigged to carry a wide variety of missiles and smart bombs.