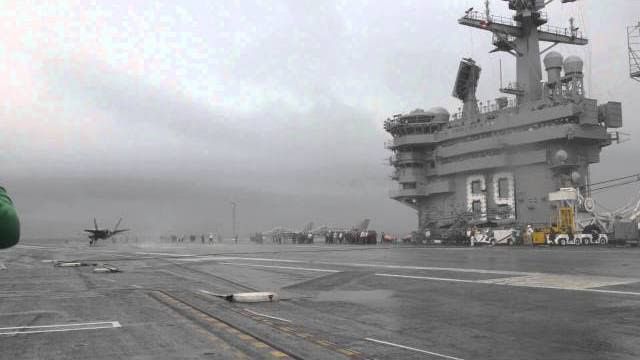 An F-35C Lighting II makes an arrested landing aboard USS Dwight D. Eisenhower (CVN 69) October 2, 2015, operating off the east coast of the US. The F-35 Lightning II Program is conducting its second developmental test (DT-II) at sea. While aboard Eisenhower from October 2-15, the Pax River Integrated Test Force (ITF) will test F-35C carrier suitability and integration in the at-sea environment. The test team will achieve this objective through a series of test events designed to gradually expand the aircraft operating envelope at sea. Shipboard testing delivers the opportunity to conduct routine F-35C operations while embarked on an aircraft carrier. The F-35C will perform a variety of operational maneuvers during DT-II — including catapult takeoffs and arrested landings — while simulating maintenance operations and conducting general maintenance and fit tests for the aircraft and support equipment.