Polish Air Force Acquires Missiles for the MiG-29; Ukrainian Contractors May Place Their Offers Too 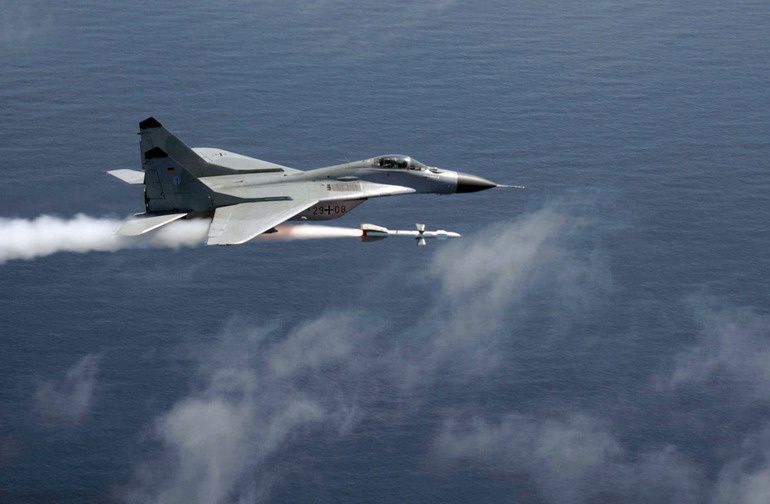 A German air force MiG-29 fires an R-27 radar-guided missile. The Polish air force is looking to buy 40 such missiles to maintain the capabilities of its own MiG-29s, and says it will allow Ukrainian suppliers to compete. (Luftwaffe photo)

Poland’s Armament Inspectorate announced that it has begun a procedure to acquire radar guided R-27R1 missiles, used as the main armament of the Polish MiG-29 fighters. Ukrainian manufacturers are allowed to submit offers as well.

The procedure concerns procurement of 40 R-27R1 missiles. This type of weaponry is the basic armament of the MiG-29 fighters used by the Polish Air Force. The missile is a semi-active radar-guided weapon used against airborne targets at close and medium ranges, in any weather conditions, by day and night, in any direction. This type of missiles requires the launch aircraft to continuously track the target with its radar.

According to the available information, R-27R1 missiles are tailored to destroy airborne targets at distances beyond 50 km, however, the maximum range is dependent on the manoeuvres implemented by the target (approaching, going away, manoeuvring). The Armament Inspectorate notes that the missiles should belong to “Category One”, and they should be manufactured not more than one year before initial delivery.

The manufacturer is required to guarantee the usability period for the R-27R1 missiles of at least 96 months (if missiles are hermetically sealed) and for another 60 months, once the weapon is unpacked.

The acquisition procedure is going to be realized in line with the Public Procurement Law. The procurement may be realized by contractors whose seat is located within the territory of the European Union, European Economic Area or within the territory of a country with which the Polish, or the EU authorities, concluded an agreement regarding the defence and security procurement. The Armament Inspectorate notes that, besides the companies from the above-listed states, potential contractors from Ukraine may also submit their offers.

R-27R1 missiles, as well as other derivatives of the R-27 missile, are being offered by the Ukrainian Artem company which supplied the missiles, referred to by NATO as AA-10 Alamo, to India.