The IAF Prepares for the UAV Threat The threat of UAV’s became substantial in Operation “Protective Edge". The Air Control Division, responsible for discovering the threat and the “Patriot” Division responsible for its interception are preparing for the new threat

"Following the operation, the division's focus was turned to the UAV threat", said Lieutenant Roy Dgani, "Patriot" Division Officer. "The "Patriot" system is very efficient when dealing with UAV penetration".

Following the Operation in the passing summer, the division's yearly training program was remodeled, as were the qualifications. "Specific UAV discovery training was added to the division's combat soldiers qualification", mentioned Lieutenant Dgani, "The cadets will learn how to differentiate between a friendly UAV and a hostile one, with the help of a specific system and other criteria".

When it comes to training exercises, in the past year since the division's interceptions they have doubled in number. Moreover, the cooperation with various squadrons, mostly combat squadrons has strengthened significantly and is considered an integral part of the soldiers training exercises.

"The batteries routine has changed, we have changed the procedures in order to suit the current situation and to cope with the modern threats", shared Lieutenant Dgani about the perceptual change in the division. 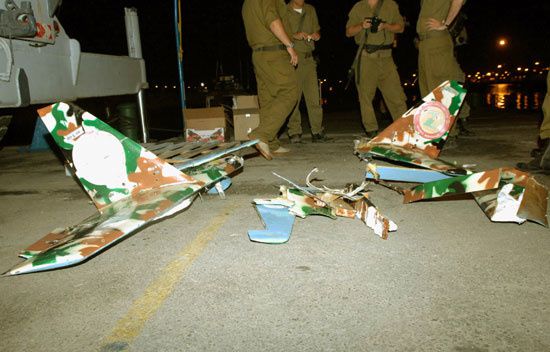 The Air Control Division, which is responsible for the supervision of all air traffic and specifically the supervision of aerial forces in operational activity, the management of the aerial space and assistance in its protection, is improving its readiness to cope with the changing arena.

The division has began the examination of the procurement of a new radar for the regional control units, that will be suited to face the future challenges that the Air Force will face in the next few years, with the most relevant being the UAV threat.

"The new radar will be a strategic asset to the state of Israel", declared Major Ronen, The Head of the Radar Department.

The radar will contain improved and more precise recognition and classification abilities than its predecessor (it can better differentiate civil aircraft and hostile UAVs). The ability to correct malfunctions will improve and by utilizing modern networks the efficiency of data transfer between the radars and the regional control units will improve.

"When designing the new radar, we are considering the next 20 years" said Major Ronen.