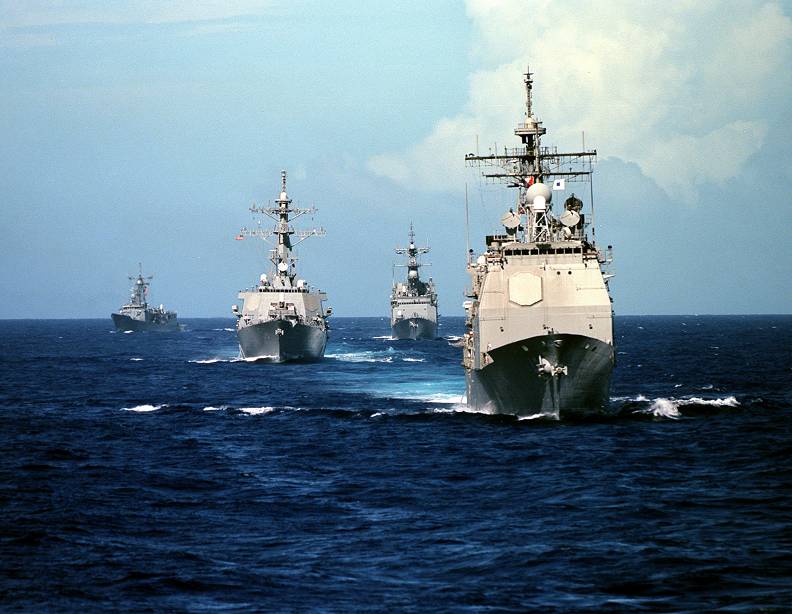 Sam Lagrone has a Janes Exclusive up behind the firewall. There is a lot to think about and discuss here, too much to cover in one post although I encourage folks to open fire in the comments.

The first of the US Navy's (USN's) future Arleigh Burke-class Flight III ballistic missile defence (BMD) destroyers could cost between USD3 billion and USD4 billion to build, Jane's has learnt.

The projected figures, which appeared in early USN estimates for a replacement for the cancelled next-generation guided missile cruiser (CG(X)), were confirmed by several industry and military sources. Shipbuilders Huntington Ingalls Industries (HII, formerly Northrop Grumman Shipbuilding) and General Dynamics Bath Iron Works (BIW) were asked to provide the cost data for the Flight III - which will perform the BMD role in lieu of CG(X) - as part of the navy's 2009 Hull and Radar Study.

As has been previously discussed, the DDG-51 Flight IIIs are expected to field the radar selected as a result of the Air and Missile Defense Radar (AMDR) study from 2009, and with that requirement alone the Navy is required to make several changes to the DDG-51 design. The end result means that DDG-51 Flight III is not really a DDG-51, but an evolved new class of warship based on the best and lessons from the DDG-51 and DDG-1000.

With a planned aperture of 14 ft, the AMDR will be less sensitive than the 22 ft variant that was planned for CG(X) but more sensitive than the SPY-1D air-search/fire-control radar that equips Flight IIA ships. The power-hungry AMDR will require a costly new electrical system encompassing a more robust electrical grid, and must be able to integrate follow-on systems, adding risk and uncertainty to the Flight III design.

In particular, ship designers will probably have to upgrade the 440 V grid in the current Arleigh Burkes to a 4,160 V grid to accommodate the 10 MW needed to drive the AMDR. Increasing the voltage in a Flight III grid would allow more power to flow safely and reliably to the ship's systems, but it would incur additional engineering and design expenditures.

The DDG-51 Flight III design will leverage a hull form similar to the DDG-51 but will apparently require a complete redesign internally in order to leverage DDG-1000 technologies like electric power systems in order to support the expanding mission areas. Preliminary design of the new warship is currently planned through 2012 with a contract design phase towards specific detail planned for 2013-2014.

It is important to note, that while this warship is being called DDG-51 Flight III, that is a Flag level communications snafu waiting to happen. This ship clas should be a new program. The Navy is basically going to try to design, build, and field a new high end destroyer in about a decades time, which for naval construction is remarkably fast. As an evolutionary design - thanks largely to R&D from DDG-1000 and the DDG-51 Flight IIA restart - the Navy is actually saving a lot of money in developing this new warship, but with cost estimates of between $2.7 - $3.7 billion for the first ship, the Navy finds itself right back where it started with DDG-1000.

This is why, and I discussed this many times on the blog at the time, the Navy never made a cost argument in Congressional testimony regarding the DDG-1000. The Navy said a lot of things, but neither the CNO nor admirals in testimony ever publicly used the high cost of DDG-1000 or the lack-of-AEGIS issue as justification for truncating the DDG-1000 program. Right about now, that whole on-cost, on-schedule DDG-1000 program after ship #3 is looking like a real bargain, but again, DDG-1000 is designed to be a warship with superior land attack and gun warfare capabilities, while this new warship is intended to give the Navy the ability to be superior against low-orbit threats like ballistic missiles.

The enormous cost of this new surface combatant in the context of an emerging age of global naval power growth and more capable anti-access, area denial capabilities raises legitimate questions regarding the future force structure of the US Navy. As the high end surface combatant suffers from legitimate mission creep, now requiring capabilities towards military superiority against ballistic missiles, combined with all the other tasks found in the development of multi-mission capable warships, is the Navy properly accounting from a holistic perspective the impacts of more and mroe investment in sustaining mutli-mission capable ships that can perform at the highest end of every mission area? How long can the Navy sustain generational growth at the high end of surface warfare at a cost of an extra ~$1 billion added cost per ship before the fleet is too small to meet the primary mission of the Navy vs the threats given primary mission focus for the Navy?

When the Navy increases the capability requirement at the high end of any mission capability of the surface force, an action that will almost certainly require a reduction in the size of the surface force to compensate for the new requirement cost trade-off, how does that impact the lesser assets of the surface force? The Navy has argued, and until now I have agreed, the Navy does not need a frigate because the Navy has a high quantity of major surface combatants capable of meeting the entire range of combat requirements a frigate would perform. However, in the context of the cost of the AMDR surface combatant, quantity at the high end is very much in doubt, and the argument the Navy does in fact need a higher quantity of surface combatants at the low end to compensate for the reduced quantity of high end vessels is a very compelling argument in favor of a frigate. I know one thing, I do not see how the Navy can justify construction of the current LCS designs after the existing contracts through FY15 are fully executed, because as the high end shrinks due to cost constraints, the low end of the force must be adjusted in capability to compensate.

With that said, the requirement to field unmanned systems in quantity doesn't simply go away, and the contributing combat role the LCS represents for the 21st century fleet is just as necessary but very different from a frigate. Throughout the history of the Navy, major influences to force structure - like adding BMD to the fleet or observing cost increases in aircraft carriers or submarines - required a holistic view of the fleet and adjustments across the total of force structure. This is why, for example, since WWII ships are introduced as part of a family. The ASW destroyer (Sprunance) and convoy escort frigate (Perry) were part of a family, a family that included the Sea Control Ship until that was canceled. The DDG-1000 and LCS were part of a family of ships that included the canceled CG(X). The current cruiser and destroyer warships of the US Navy are part of the AEGIS family of warships. I do not see how the Navy can change the high end of surface warfare to be centric to fighting low-orbit threats like ballistic missile defense at such a high cost and not compensate this major force structure without introducing a family of ships that addresses the cost relationship this major combatant will have on the total force.

Today the Navy is facing significant costs, and is adding significant risk to the total force, by following a pattern of force structure evolution that may have reached the end of it's ability to meet mission requirements for the United States. Evolving the Nimitz CVN -> Ford CVN, evolving the DDG-51 Flight IIA -> DDG-51 Flight III, evolving the Los Angeles class SSN -> Virginia class SSN, and evolving the Ohio SSBN -> to SSBN(X) has resulted in the Navy building bigger, more capable, but a much smaller and more expensive force where combat capabilities are being condensed into a very powerful, but numerically challenged fleet relative to the scope and scale of demand and requirements. Has the multi-mission fleet evolution model for naval force structure reached a point of risk where, by putting all eggs into fewer baskets, the Navy now potentially assumes risks too great to compensate for should the Navy suffer from attrition in warfare?

What is the red line, and who has the guts in OPNAV to admit it gets crossed when the institution isn't really designed to admit potential weaknesses in major program efforts. It's like the big deck nuclear aircraft carrier question, how will anyone really know when it becomes obsolete in an age of increasingly sophisticated long range and lethal military capabilities being proliferated globally? It's why I warn young naval officers, be very careful not to be too critical of the battleship admirals prior to Pearl Harbor in 1941, because that same scenario could easily be repeated with the carrier admirals of 2011.

If the Navy was to build a larger quantity of smaller, single purpose ships - when comparing the cost of just four DDG-51 Flight IIIs at a cost of $12 billion in shipbuilding, what are the trade offs from a cost/benefit risk assessment perspective when evaluated against alternative force structures? Would 6 smaller frigates at $1 billion each, 1 LPD-17 sized unmanned systems mothership at $2.5 billion, and 1 $3.5 billion major surface combatant be a better mix of combat capabilities at the same cost as 4 DDG-51 Flight IIIs? What ever happened to the large, simple single mission destroyer? You know, the Brits might be a lot smarter than we think for building so much empty space into the Type-45s to keep costs down. I do wonder, was the proposed expensive CGN(X) large ballistic missile defense cruisers that would serve as major networked radar vessels really a bad idea, or was it simply a bad idea in the context of a surface navy that appears completely unwilling to address the changes such a vessel would have to the rest of the force structure?

One thing is certain, this DDG-51 Flight III is so expensive that it appears irresponsible for the Navy to introduce it as simply a replacement program for major surface combatants. This warship should be part of a family of ships that are designed to compensate for the stresses a smaller high end surface force will inevitably place on the rest of the fleet.