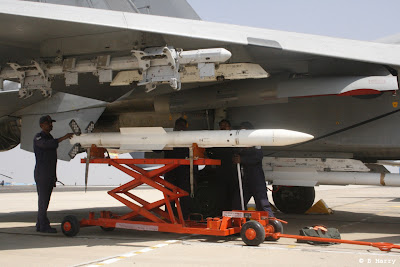 India's national auditor, in a report released yesterday, has said the Indian Navy chose to buy the Vympel R-77 BVR missile for the MiG-29K weapons package despite adverse observations about the missile's serviceability by the air force at least six years previously. Here's what the auditor has observed:

"A critical armament for the MiG 29K aircraft is a BVR missile, which augments the ‘Beyond Visual Range’ capability of the aircraft. The [R-77], one such BVR missile was acquired by the Indian Air Force between 1999 and 2002. However, the serviceability status of the missile, in evidence prior to the Navy contract of March 2006, has been poor as brought out in paragraph No. 3.2 of the Report of the C&AG of India, No. CA 18 of 2008-09. High rate of unserviceability was noticed by IAF since 1999 from the first lot of missiles received. By November 2005, IAF decided against refurbishing the missiles “X” after life expiry and started considering a suitable replacement for future procurements. Nonetheless, Indian Navy concluded the contract in March 2006 for supply of armaments for MiG-29K aircraft which, inter alia, catered for supply of 40 Air to Air missiles [R-77] at a cost of USD 21.88 million. Audit noted that there was a delay of 51 months in finalising the weapon package for MiG 29K aircraft, Indian Navy failed to adopt an integrated approach to utilise the data/knowledge base of IAF and consequently ended up by procuring 40 missiles worth USD 21.88 million (Rs 97.67 crore) whose serviceability has been found unreliable by the IAF. Thus, the Ministry modified the decision of CFA by decreasing the quantity of approved armament and procured additional items worth Rs 93.68 crore which were not envisaged at the time of seeking approval of CFA to sustain within the financial ceiling. Further, Indian Navy procured Air to Air missiles [R-77] costing USD 21.88 million which had a track record of poor serviceability for which the IAF is seeking replacement since November 2005. The matter was referred to the Ministry in November 2010; their reply was awaited as of July 2011."