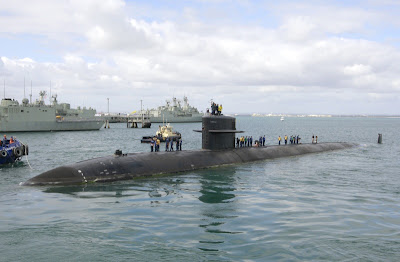 The Royal Australian Navy has hosted the U.S. Navy's Submarine Command Course (SCC), at Fleet Base West and in the fleet exercise areas off Western Australia.
Australia supports the SCC every year; regularly sending an Australian submarine to Hawaii (as well as the international biennial Rim of the Pacific Exercise), or hosting the course in Western Australia.
This year's exercise involved HMAS Dechaineux, HMASNewcastle, HMAS Sirius; Maritime Patrol Aircraft from theRAAF Edinburgh-based 92 Wing, and USS Oklahoma City (SSN 723).
Exercise participants gained valuable experience in complex submarine operations with the opportunity to share the knowledge and expertise of the MK48 Advanced Capability Torpedo and the BYG-1 Combat System which are employed by both submarine forces.
“The exercise proved to be extremely beneficial for all participants; enabling new crew members to put into practice what they have been taught as well as allowing experienced crews to hone their skills,” said CMDR Jason Cupples, Commanding Officer of HMAS Dechaineux.
The SCC has been training prospective commanding officers of U.S. submarines since 1944 and is an important milestone in those officer's careers. It is also an example of the outstanding relationship between the submarine forces of Australia and the United States.
“The students of the SCC responded well to the challenges they encountered, with the crew enjoying the opportunity to exercise with the Australian submarine force and Australian warships,” said USS Oklahoma City Commanding Officer, Commander Andrew Peterson, US Navy.
All participants agreed that this year's exercise proved to be a success for all involved.
(Royal Australia Navy)
Partager cet article