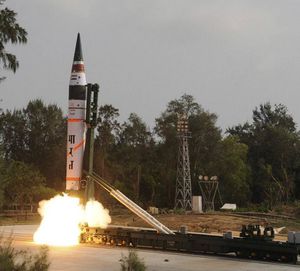 In the face of international opposition, North Korea launched a rocket on 12 December 2012 to place a satellite in orbit.1 Its earlier four attempts had all failed; the first of these was in 1998 and the most recent failure was in April 2012.2 The “successful” launch on 12 December 2012 places North Korea among the few nations (United States, Russia, China, Japan, Europe, India, Pakistan and possibly Iran) that possess the ability to build long range ballistic missiles. What has added to international concerns about North Korea’s missile programme is its transfer of missiles banned by multilateral treaties and conventions to countries such as Pakistan and Iran as well as its support for international terrorist groups.3

India has no direct dispute with North Korea and the distance separating the two countries serves to further reduce threat perceptions. India’s interest in North Korea’s nuclear and missile programmes comes from the reported clandestine co-operation between North Korea, Pakistan and Iran in this regard. There have been persistent reports that North Korea has assisted Pakistan’s missile programme in return for Pakistani assistance with its nuclear weaponisation programme. The current Pakistani ballistic missile capability extends to a reported range capability of about 1500 to 2500 km, which is equivalent to that of the North Korean Taepodong-I missile and its further developments. The test conducted on 12 December 2012 by the Unha-3 rocket gives North Korea a range capability of 5500+km or the equivalent of the Taepodong-II missile.4 India’s Agni-V missile was claimed to have a range of 5500 km and falling into the classification of an ICBM. This is a range capability not currently possessed by Pakistan and one, if inducted by Pakistan from North Korea, would be detrimental for Indian security. Iran has also been suspected of being a recipient of North Korean ballistic missile technology.5 Iran’s acquisition of long range ballistic missile capability from North Korea would further complicate India’s security situation. Beyond this direct impact of North Korean missile proliferation, India, as a responsible member of the international community, has no choice but to support international action and restrictions on countries that act and behave in a manner that is found unacceptable by the rest of the world.

India has ballistic missile armed countries on its Northern as well as Western borders. Further, territorial disputes exist with both of these neighbours. The steady spread of ballistic missile technology to ever more states continues unabated. Although the likelihood is remote presently, there is no guarantee that in the near to medium term future such technology will not be available with more of India’s neighbours. There is also the alarming, but above zero, possibility of ballistic missiles falling into the hands of terrorist groups especially in “failing” or “failed” states such as Pakistan whose military includes several sympathisers of terrorist groups. (Two terrorist organisations, Hamas and Hezbollah, have already demonstrated the ability to obtain and use such weapons – Fajr-5 missiles with ranges of 75 km – against Israel).6 Such developments in its neighbourhood have adverse implications for India.

No country is in a position to be able to control the proliferation of ballistic missile technology all by itself, India included. Even missiles with non-nuclear payloads could be a major threat to India’s security and economy. Hence, if unable to avoid the proliferation of ballistic missiles in South Asia, India would have no choice but to work towards countering this threat. Nuclear armed ballistic missile attacks would be countered by India’s declared Nuclear Doctrine and executed by the Indian strategic forces. The challenge here would lie in dealing with situations where the country responsible for the launch of a nuclear attack cannot be easily identified, as in the case of missiles launched from sea.

There are two possible solutions to countering the conventional payload ballistic missile threat. The first would be to harden all population centres and other vital facilities against such attacks. Given the very large number of these and the ever increasing range and accuracy of ballistic missiles available with an ever increasing group of countries, this is unlikely to be feasible or even prove sufficient. The second option would be to develop a viable Ballistic Missile Defence (BMD) system. India’s Defence Research and Development Organisation (DRDO) is already working on a ‘only terminal stage intercept’ BMD system, which has achieved several notable successes during its trials to intercept target ballistic missiles in the exo-atmospheric and endo-atmospheric stages. Ballistic missile proliferation in India’s neighbourhood requires the development of a more capable BMD system.

While the DRDO’s BMD project is reportedly proceeding well and should be available for initial deployment in the near future, it is only a terminal phase system as of now. There is a need to extend the current capability towards the ability to engage ballistic missiles during their mid-course and boost stages as well as during the terminal stage of their flight. DRDO may need to explore air-based, Directed Energy Weapon (DEW) and Electromagnetic (EM) gun based solutions in addition to its current land based ‘anti-missile missile’ BMD system to achieve a more robust and capable BMD system or a system of systems capable of reliable boost phase, mid-course phase and terminal phase ballistic missile intercept and destruction.