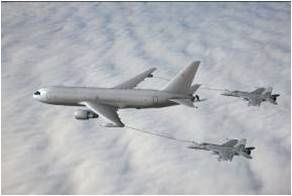 The programme, meant to produce an aerial tanker to replace the Boeing KC-135, is 21% finished with its development schedule and remains on time and on budget.

The first parts - skin for the tail boom - have been produced, "so if someone tells you this is a paper plane, you can point at them and say, 'liar!'" says Thompson.

"I will have plenty of number two and number three priorities, but my number one priority is to successfully get through the critical design review (CDR) next year."

Budget sequestration, scheduled to take effect in January, 2013 without Congressional intervention, would be "near catastrophic" for the programme, says Thompson.