Connexion + Créer mon blog
<< The Hawk Sees All In Libya Next Bulava launch to be held... >> 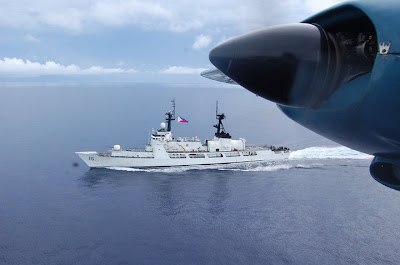 
PHL Navy's biggest warship arrives at Manila Bay
President Benigno Aquino III is set to formally welcome on Tuesday the Philippine Navy’s newly acquired — and largest — ship.
The Hamilton cutter ship arrived at the Manila Bay on Sunday morning after sailing for more than a month from San Francisco in the United States. It will be named BRP Gregorio del Pilar, after one of the country’s heroes.
Navy chief Vice Admiral Alexander Pama boarded the ship at the Manila Bay anchorage and had a lunch with the 95 officers and men, led by Capt. Alberto Cruz, that sailed the ship from the US last July 18.
“They already arrived and they will undergo immigration and quarantine [inspection]. This is part of our regulation whenever we have ships coming from abroad," said Pama.
The 44-year-old ship was acquired from the US Coast Guard through the US Excess Defense Articles program.
The ship will be deployed at the West Philippine Sea where the country has a vast maritime interest to protect.
President Aquino, accompanied by Defense Secretary Voltaire Gazmin, will lead the formal welcome ceremony for the ship and its crew on Tuesday morning at the South Harbor. Guests will have the chance to tour the ship.
Pama said the acquisition of the ship will have a big impact on the Navy’s capability on the protection of the country’s maritime resources.
“This will be icon to the revival of the capability upgrade of the Philippine Navy… This will be a symbol of our seriousness [in upgrading the Navy capability]. Because we are a maritime nation, this will jumpstart our revival of our Navy’s capability," he said.
Noting that the ship was able to cross the Pacific Ocean, Pama said the ship can represent the government anywhere in the country despite any the sea condition.
He said that after the arrival ceremony on Monday, the ship will be undergoing dry-docking and repainting. The color of the ship will changed from the current white to gray, the Philippine Navy’s official color.
(GMA News)
Partager cet article

Published by RP Defense - dans Asia & Pacific
commenter cet article …
<< The Hawk Sees All In Libya Next Bulava launch to be held... >>