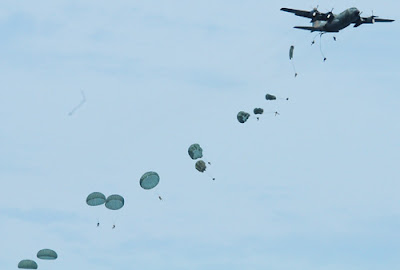 MUARA, - The Royal Brunei Armed Forces Special Forces Regiment has recently conducted a bilateral exercise with their counterparts from the 1st Commando Regiment, Australian Defence Force called the EXERCISE NIGHT LEOPARD 2011.
A series of joint special operations training was conducted by both regiments since they earlier this month. The exercise started with a jungle operation at one of SFR training areas in Temburong followed by an amphibious operation held at an off-shore oil rig. Following this, troopers from both regiment also participated in a combined water descend static line parachute jump in Muara Beach. The climax for the bilateral training was a culmination special operation exercise at an island off Brunei Bay.

This exercise has also given the opportunity for the Special Force Regiment to exchange valuable operational knowledge with the 1st Commando Regiment. Through this joint exercise, the Special Force regiment and 1st Commando Regiment have demonstrated high levels of professionalism and will continue to strengthen by carrying out more engagements in the future. The warm relationship has been enjoyed by both regiment dating back from 1998 and the next bilateral exercise will be conducted next year in Australia.
(Brunei MoD)
Partager cet article