Collins Class Submarines Most Expensive Ever to Go to Sea 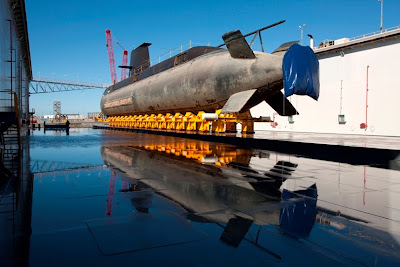 AUSTRALIA'S troubled Collins Class submarines are more than twice as expensive to operate as US Navy nuclear submarines that are more than three times bigger.
Figures obtained by the Herald Sun, show the six Collins subs cost about $630 million a year - or $105 million each - to maintain, making them the most expensive submarines ever to put to sea.
Only two of the fleet of six could go to war at the moment.
The annual price for "sustainment" (maintenance and support) is $415.9 million for 2011-12 with operating costs running at $213.4 million for the year, for a total of $629.3 million.
A US Navy Ohio Class nuclear attack submarine - more than three times the size of a Collins boat - costs about $50 million a year to operate.
The cost figures are revealed as Defence officials say at least two possible contenders for the navy's new submarine fleet - the Spanish S-80 and French-Spanish Scorpene class boat - have been ruled out of the future submarine project.
In 2008, embarrassed navy brass stopped reporting on the performance of the Collins fleet in the Defence annual report.
The 2007-08 performance outcome for the Collins fleet showed it achieved 64 per cent of its mission capability, or 559 days of actual availability.
Since then the figures have been classified "secret", but assuming a similar outcome, then sustaining the subs now costs taxpayers $1,643,835 a day for all six vessels.
With only two or three available for duty, that cost blows out to more than $500,000 a day.
Sustainment costs are forecast to be $443 million this year. Since 2004, the costs have more than doubled from $204 million.
Opposition defence spokesman Senator David Johnston accused the Government and Defence Minister Stephen Smith of taking their eye off the ball when it came to the submarines.
Mr Smith said the Government was being careful about plans for 12 new submarines because 80 per cent of problems with the Collins could be traced back to mistakes in the planning stage.
OHIO CLASS NUCLEAR ATTACK SUBMARINE
Displacement = 16,500 tonnes
Length =170 metres
Speed = 12 knots surfaced 20 kts submerged
Crew = 155
Armament = Mark 68 torpedoes, Trident ballistic nuclear armed missiles, Tomahawk cruise missiles
COLLINS CLASS SUBMARINES
Displacement = 3000 tonnes
Length = 77 metres
Speed = 10 knots surfaced 21 knots submerged
Crew = 38 to 48
Armament = 6 X 53cm torpedo tubes, Mark 48 torpedoes
(Herald Sun)
Partager cet article