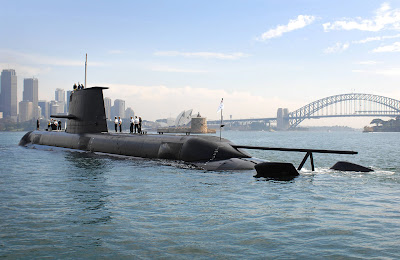 THE federal opposition is set to grill the government and Defence today over their plans for through-life maintenance of the troubled Collins-class submarine fleet, claiming the boats' costs will rise 36 per cent over the next decade.

"The Gillard government is reluctant to face any real scrutiny and no portfolio illustrates this more starkly than the Defence Minister and his department," Mr Johnston told The Australian.
He queried the reason for delays from Mr Smith in replying to questions on notice related to outstanding defence concerns -- many of the questions asked more than two months ago.
A reply received last week to queries about ongoing costs for the Collins-class submarines included a reference indicating an answer had been prepared earlier this month.


That begged the question of whether the minister or his department delayed the reply to minimise the level of scrutiny they would face before Senate estimates, Mr Johnston said.


Defence estimates hearings begin today and the opposition is expected to focus on delays to implement a through-life support plan for the submarine fleet.
In 2009 the Auditor-General reported on the management of the Collins-class sustainment but two years later no contract had been negotiated despite the two principal parties being wholly government-owned, Mr Johnston said, referring to the Australian Submarine Corporation and Defence Materiel Corporation, responsible for military acquisitions and maintenance.
In reply to Mr Johnston's questions, the government said it was expecting to finalise the submarine maintenance contract "by the middle of 2011".
He said Mr Smith's office was notorious for failing to answer either questions on notice from the opposition or questions arising out of Senate estimates.
"There are currently 53 outstanding questions asked more than two months ago relating to submarines and the Strategic Reform Program, and 75 questions asked following the last round of Senate estimates in February," Mr Johnston said.
"These questions relate to a number of acquisition programs that have -- in defence terms -- been realigned, rescheduled or re-phased by defence bureaucrats, and are important to show the direction in which defence is heading."

A promised improvement for a more prompt response to questions from the opposition had not occurred, he added.

As of last night, Mr Smith's office had not responded to The Australian's request for comment.
(The Australian)
Partager cet article