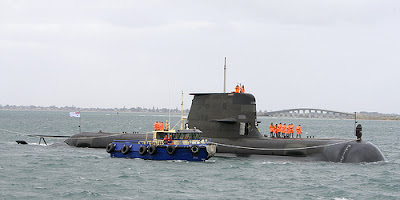 DEFENCE Minister Stephen Smith has ordered a review of the maintenance regime of the navy's troubled Collins-class submarines and why so few of them are available for operations.

Mr Smith said last night the submarines were a vital part of the country's maritime national security capability.
"But problems with the availability of the Collins-class are longstanding, deeply entrenched and well known to the public," he told the Australian Strategic Policy Institute.

He said the problems were significant and technically complex, and they had to be sorted out before work could begin on plans for 12 replacement "future submarines" promised in the Rudd government's 2007 defence white paper.
ASPI estimates those submarines will cost about $36 billion to design and build in Australia.

"So for what will be the largest defence capability project that the commonwealth of Australia has seen, very careful attention in its early stages is demanded, and that's what we're doing, including sustainment," Mr Smith said.

He said that at times only one Collins-class submarine had been available for operations.

"This situation is unacceptable but will not be addressed simply by continuation of the status quo."

Mr Smith said getting more submarines operational for more of the time was a significant challenge for the government, Defence, the navy and the Australian Submarine Corporation.

A review would be conducted by John Coles, a British-based private sector expert in major defence programs. Mr Coles would provide an interim report by December and a final version by March, Mr Smith said.