PARIS — A single round of small-arms fire hit French Army Lt. Damien Boiteux as he flew a Gazelle attack helicopter over Mali on the afternoon of Jan. 11. The bullet severed an artery in his leg, and although he and his co-pilot brought the helicopter back to base, the French Army Air Corps officer died from his wound. 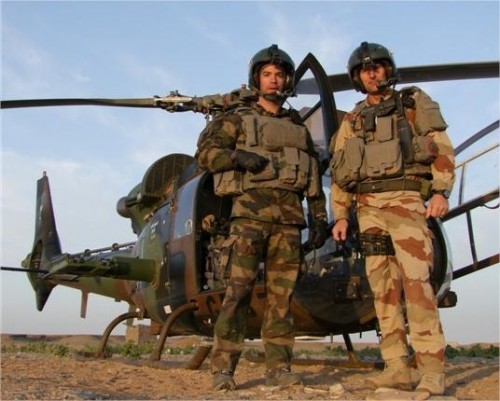 Small-arms fire in the same action forced the pilot of a second Gazelle to land the heavily damaged aircraft, a defense official said. A third back-up helicopter flying nearby with a rescue team picked up the crew and destroyed the downed helicopter.

French forces were able to respond quickly to Islamist and Tuareg insurgents as they headed toward Bamako in strife-torn Mali because equipment such as Gazelle helicopters was prepositioned in the region. Such light, simple and inexpensive equipment allows rapid intervention, but as the death of Boiteux and the loss of the second helicopter shows, there is a price to pay. That’s just one of the immediate lessons to emerge in the days after French President François Hollande gave the order that unleashed French Air Force Mirages, Rafales and light attack helicopters against two motorized columns of 200 vehicles and 1,200 rebel fighters headed toward the capital.

Besides the pros and cons of light, simple kit, the past few days of fighting have shown that budget-wracked France is still willing to project power, while prepositioned bases and reliable intelligence, surveillance and reconnaissance (ISR) remain crucial, analysts said.

Those themes are emerging as France draws up a white paper on defense and security, prepares for the new multiyear military budget and seeks to relaunch a European defense initiative as a counter to spending cuts.

The Gazelle is an “old chopper” that lacks protection, but France was able to launch into action so quickly because the forces have such light, “rustic” equipment, said Etienne de Durand, director of security studies at think tank Institut Français des Relations Internationales.

This shows the advantage of keeping these types of platforms rather than relying totally on modern, sophisticated equipment, which is expensive, heavier and difficult to deploy, he said.

France and other nations must maintain a range of equipment to face not just symmetrical but asymmetrical threats, such as rebel fighters in pickup trucks, experts said. That simplicity of equipment is linked to quantity.

“You need numbers — troops, planes and equipment,” de Durand said. A large number of troops is required, as units need to be rotated, while aircraft and equipment in numbers are also needed, not just a few high-tech units. To boost striking power, France is rushing to Mali the Tiger attack helicopter, which carries armor on the sides and cockpit floor, and a 30mm cannon in a turret, a source familiar with the situation said.

“The Tiger is engaged,” Army Col. Thierry Burkhard told journalists Jan. 18. An air mobility unit of around 15 helicopters for maneuver, support and logistics will be formed in Mali, he said.

The Gazelle has a 20mm fixed cannon, requiring the helicopter to be lined up directly with the threat to fire, whereas the Tiger can fly in parallel, with its crew protected by the armored side, and fire from the rotating turret under the cockpit.

The longer range of the Tiger’s gun cuts the risk from AK-47s and light machine guns.

The Army is expected to send more than the five Tigers deployed in Afghanistan and as quickly as possible.

The Mali campaign, dubbed operation Serval, also shows the need for prepositioned bases in Africa, de Durand said. They cost a few hundreds of millions of dollars and require a small number of troops, but they are cheaper and faster than huge fleets of C-17 and A400M transports, or securing an airport and starting from scratch.

Following the British military withdrawal “east of Suez” in 1968, France is the only European country with a network of bases in Africa, in its former colonies, and there is talk of drawing down these facilities.

The Mali action shows France is ready and willing to project military power in a post-Afghanistan environment in which people are averse to overseas operations.

“The truth is there will be more and more of them,” said Luc Viellard, a director at consultancy Cie Européene Intelligence Stratégique. But they will be — and must be — short-term rather than long, drawn out engagements.

In Mali, France could not “lead from behind,” limiting its role to providing logistics, intelligence, mentoring and training support for African troops, he said. French troops are fighting in the front line, while European and American allies are restricting help to logistics and intelligence gathering.

Paris’ reliance on partners comes as NATO and the EU are looking to pool defense capabilities as a way of coping with the financial crises besetting Western economies.

The gaps in capabilities — aerial refueling, transport, intelligence gathering — were highlighted in the Libya air campaign, led by Britain and France.

There’s a real question whether there will be guaranteed access to assets such as air-to-air refueling and transport aircraft under the pooling and sharing policy proposed by the European Defence Agency, said Camille Grand, director of think tank Fondation pour la Recherche Stratégique. His question: Can countries have confidence their European partners will step forward in times of crisis?

France has drawn on a series of ad hoc arrangements with America and European allies, rather than the European Air Transport Command at Eindhoven, the Netherlands, Grand said. Countries including Britain, Belgium, Canada and Denmark have pledged transport planes to help France. Germany is not helping France directly but said it would send two C-160s to airlift African troops from a planned 3,000-strong military mission to support the Malian government.

De Durand said the lesson from Mali is: Do not rush into multilateral arrangements, but avoid pooling and sharing whenever it restricts a capability to act quickly. In a crisis, there is little time.

“The aim should be to leverage European cooperation to increase defense capabilities — in other words, more Europe for more capabilities, not the other way round,” de Durand said.

The defense white paper, currently being written, was looking at recommending big cuts in defense spending. Mali is a warning to limit those reductions, de Durand said.

“They are a real force multiplier,” Viellard said. “They allow planners to decide the where, how, what volume of intervention.” Over the Sahara, France operates an optical military satellite system for imagery, Air Force jets with reconnaissance pods and the French Navy’s Atlantique 2 (ATL-2), a twin-engine aircraft designed for maritime patrol but used as an ISR system. Harfang medium-altitude, long-endurance UAV systems are also to be deployed soon, Viellard said. But this is not enough, and planners need a sustained presence over the area. Because of budgetary pressure, low-cost solutions have to be considered.

“The ATL-2 used as an ISR platform in Mali is a stopgap solution. They are good aircraft, and some of them are now equipped with a new surveillance turret, but new-generation equipment is needed,” Viellard said.

One possibility is a system of roll-on, roll-off pallets of sensor equipment for transport aircraft such as C-130, C-160 Transall or A400M.

The 2008 white paper on defense and security pointed up the significance of anticipation and intelligence gathering. “We need to continue. Mali shows an effort needs to be made,” Viellard said.