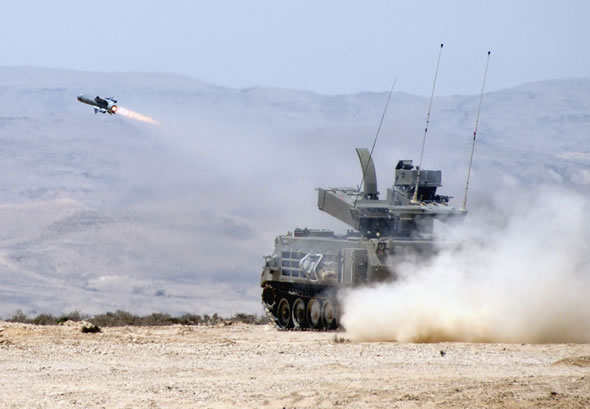 The Tamuz, an extended-range electro-optically guided missile was developed to meet the IDF 'deep attack' strategy in the 1980s, eliminating enemy second echelon forces before they reach the front line. Photo: IDF.

An interesting debate was held recently at the Latrun International Land Warfare conference, as the commander of the IDF Northern Command, Major general Gershon Hacohen detailed the evolution of Arab armies and irregular forces into semi-irregular formations, challenging the Israeli domination of the battlefield with hybrid warfare concepts. Defense Update covers this topic in two parts, one outlining the transformation of the Syrian land forces. A follow-on article will examine the evolution of similar doctrine by Hezbollah and Hamas and how such methods are challenging a technological superior military power like the IDF.

In 1991 the Syrian Army began a shift toward irregular warfare that continues today. Instead of modernizing its armored vehicles, fighter aircraft and naval vessels, the Syrian army allowed massive buildup along the border lines, expanded its commando battalions (fugs), massively equipped with advanced Kornet and Metis anti-tank missiles and tandem RPGs. Syria went on a shopping spree buying medium rockets and ballistic missiles, and the technologies required to enhance, modify and mass produce such weapons. The idea behind this new trend was to counter uncontested air fighting supremacy, demonstrated in all Arab-Israeli conflicts.

A similar change took place in Iran, where the majority of military investment went into the development and deployment of ballistic missiles, rockets special forces and also high speed armed naval systems to dominate the Persian Gulf.

The change was dramatic, as until then, these countries, particularly Syria, invested great efforts in building its force structure, manning, training, equipping and deploying armored and mechanized divisions, reaching a force level that could maintain four divisions in constant readiness to enter into battle against Israel at short notice.

The Syrian Army’s 1st Corps, facing Israel south of Damascus close to the Jordanian border maintained five divisions, four of which were deployed in constant battle readiness. Four divisions was Syria’s ‘magic number’, expecting their military to face the order of battle they estimated Israel would mass against Syria in Northern Israel. Meeting this requirement kept Syria in maintaining strategic parity with the Israeli Army, after its repeated defeats in the 1967, 1973 and 1982 wars.

Parallel to the Syrian military buildup in the 1980s Israel has drawn other conclusions, challenged with meeting numerically superior enemies with its small regular force, Israel had to ‘buy time‘ for its reserve forces to mobilize. The Israelis have built their forces to defeat the Syrian army, but be prepared for a possible two-front war with both Syria and Egypt – a case that actually happened three times in 1948, 1967 and 1973.

Tamuz extended range PGM can be fired from stand off range at targets beyond line of sight.

The Israelis managed to build a formidable offensive power that could successfully deal with the first echelon forces of both armies. However, relying the IDF was required to defeat the first echelons quickly and decisively, with or without its large reserve component, since maintaining a prolonged high friction combat with second echelon forces, arriving from afar in support was unacceptable for the small Israeli army. Of particular concern were reinforcements and fresh forces that would come from Iraq, tipping the balance of power against the fledgling Jewish state, as has actually happened in 1948 and during the 1973 Yom Kippur War.

The maturation of stand-off guided weapon technology in the 1980s opened new opportunities for the IDF, fielding a number of weapon systems that could interdict such reinforcements, at long range, before they actually reached the battlezone. One of these missiles was the Tamuz electro-optical guided weapon, recently declassified and now even approved for export. Although the specific weapons were guarded with secrecy, Syrian intelligence became aware of the Israeli capabilities, but failed to realize the decisive scope of this threat until 1991.

The change of mind in the Syrian Army came after the 1991 first Gulf War (Operation Desert Storm), where Syria became part of the U.S. lead coalition forces, sending the 9th division to fight the Iraqi invasion of Kuwait along with other coalition forces ( But eluded entering into actual combat). The Gulf War was an ‘eye opener’ for the Syrian high command, becoming exposed to the high lethality of western modern weaponry and tactics, so far being entirely geared to Soviet combat doctrine and its inferior weapon technology. This earth shaking experience triggered Syrian General Ali Aslan, then Army Chief of Staff to begin the transformation.

The strategic shift was not exclusive to Syria. Iran has also implemented a similar move, by gradually expanding its reach and influence in South Lebanon through their Hezbollah proxy. Hezbollah developed its forces as independent fighting units each dug into a specific location, equipped with personnel, weapons, supplies and fortifications capable of operating continuously for days, independent of communications, supply lines or even command and control.

With several such domains dominating key locations in South Lebanon, the small semi-irregular force, trained to fight in virtually ‘hybrid’ style, was deployed to contain an Israeli land maneuver, by posing continuous fighting capability deployed throughout the theater, denying the Israelis the ‘luxury’ in attacking strategic ‘weak points‘ in an attempt to overwhelm the entire enemy array by massive surge operations. Operating such multiple domains in and around the villages and cities of South Lebanon in 2006 enabled relatively small forces of Hezbollah to deny the Israeli army dominating the battle areas, constantly keeping the Israelis at risk, despite repeated efforts to clear certain areas and vital supply routes. What seemed to be Israeli hesitation and indecision was actually an unsuccessful attempt of the northern command to seize the initiative pushing the enemy off balance.

The IDF could employ different land maneuver campaigns. One option was a deep, decisive push north, through the enemy interior, in a move that would isolate the battle area and eliminate any escape of Hezbollah northward, weeding out enemy forces by exposing their hideouts. Alternatively, a series of local operations, closer to the border, could methodically wear out enemy forces by a series of local engagements, backed by massive support fires from the Israeli side of the border, exposing minimal forces to enemy attack. Both concepts were partly tried in 2006, without much success, using insufficient force concentrations, and failing to apply continuous pressure, due to political hesitation.

The different concepts have inherent drawbacks. The deep penetrating maneuver required massive forces to go simultaneously after all enemy hideouts throughout the combat area, including locations bypassed during the initial move, in a highly organized and closely controlled operation that would seep up large IDF forces and risk significant casualties and collateral damage. On the other side, the ‘local’ alternative would not help in eliminating rocket attacks on the Israeli rear area, which inevitably raises a political issue, questioning the overall purpose of the campaign from a national viewpoint.