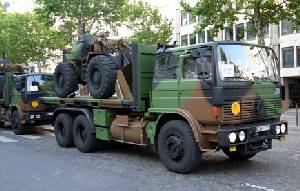 This budget provides for the support of a fleet of 8,000 trucks (including 4,000 GBCs, 2,000 TRM2000s, and the majority of the fleet of logistic transport vehicles (VTL)). The MCO contract enables the French Army to substantially reduce its stocks of spare parts outside theatres of operations, as the contract holder is committed to delivering spare parts in less than five days.

This contract will also call upon the Renault Trucks network to perform on-demand routine servicing operations for the vehicle fleet in question. These operations – classified as NTI (technical intervention level) 1 and 2 – are carried out in the civil dealerships and branches of Renault Trucks. The manufacturer will in fact provide the entire support services for some of the vehicles, especially the specialized micro-fleets. The Renault Trucks network, which has 320 customer service points in France, is going to increase its teams for the ramp-up of this operation.

This contract is implemented by the SIMMT and the manufacturer with a view to maintaining costs within the assigned budget.

To achieve this, all the trucks in the fleet are tracked by their registration number. Given the success of the first annuities of this contract, the system is going to be extended to the DOM-COM (French overseas departments and communities) and countries in which France has prepositioned troops, as well as to the other armed forces and services supported by the SIMMT.

This arrangement will increase the operational availability of the fleet, enabling the armed forces to focus on their core activity (i.e. operations) by reinforcing the SIMMT's role as through-life support contract coordinator.