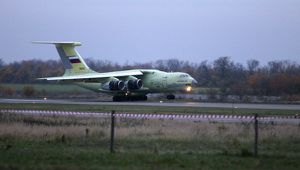 The spokeswoman was quoted by RIA Novosti as saying that all preparations were completed, but the test flight had to be cancelled because of heavy snowfall.

Noting that the adverse weather is expected to continue for the next three days, the spokeswoman did not provide any details about a new schedule.

The test flight was set to be conducted from the Zhukovsky flight test centre near Moscow, Russia, according to the Russian Defence Ministry's original programme, which includes a series of 22 test flights.

Data obtained from each test flight is expected to be collected and analysed by experts, to make any necessary enhancements to the aircraft, which is also known as the Il-476.

The aircraft successfully carried out its first 25 minute prolonged test flight at the company's aviation complex in Ulyanovsk, Russia, in February 2013.

Displaying a modernised wing-construction, the aircraft is also capable of transporting up to 50t of cargo, which is 20% greater than its predecessor, while cruising at speeds of 850km/h.

A total of 39 aircraft were ordered by the Russian Defence Ministry from United Aircraft Corporation (UAC) under a RUB140bn ($4.5bn) contract in October 2012 to help replace the Il-76 multipurpose aircraft fleet.

Initial aircraft will be shipped in 2014, while the remaining deliveries are scheduled to be completed by 2020.