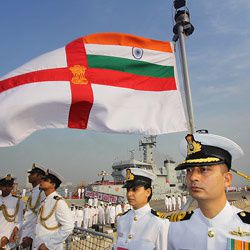 Verma said such a nuclear triad was required in view of India's 'no first-use' policy.

Setting out his analysis of India's maritime security, Admiral Verma, who is here on a three-day visit as part of a bilateral Indian Navy-Royal Navy interaction, said there was increasing awareness in India that "the destiny of our nation is entwined with our maritime destiny".

"A retaliatory strike capability that is credible and invulnerable is an imperative. The Navy is poised to complete the triad, and our maritime and nuclear doctrines would then be aligned to ensure that our nuclear insurance will come from the sea," he said while addressing a conference in London.

India is developing a retaliatory strike capability through weapon systems from land, air and sea. It is believed that it already has the capability to do so from land and air.

It will have the capability to do so with the induction of the indigenous INS Arihant nuclear submarine which is expected to be launched for sea trials in near future.

Observing that Asian nations were growing at different rates, in different ways, and different economic models, Verma expressed concern over the fact that "it may lead to rapid military growth, non-compliance with the norms of international law, and the use or threat of the use of force."

"Three of the world's four largest economies will be in Asia. Many nations widely perceived to be 'rogue', or 'failed states', also belong to the same region. The region is also recognised by many as the 'primary loci' of 'ostensible' non-state threats in the world," he said commenting on the regional scenario by the year 2025.

"Juxtaposed with these entities are three of the world's four largest Armies, and at least four declared nuclear weapon states... Certainly not a dull neighborhood!" he said.

Admiral Verma said in view of the situation, the Navy has adopted a capability-based, rather than a threat-based approach for future growth.

"We have articulated a perspective plan that lays out a roadmap for development of capability upto 2027... Our indigenous aircraft carrier project, besides the ongoing construction of destroyers and frigates, LCA (Navy) and strategic submarine programmes are a few examples," he said.

He said the Indigenous Aircraft Carrier (IAC) programme is planned to be a continuing process over the next decade-plus, as part of the Navy's medium-term aim of having at least two fully operational and combat-worthy carriers available at any given time.

Verma said of the 47 ships and submarines presently on order, 44 are from Indian shipyards.

The induction programme of various vessels, he said, has been structured to continue at a pace such that over the next five years we expect to induct ships and submarines at an average rate of 5 platforms per year provided the yards deliver as per contracted timelines.

"Our air element is also being strengthened, with the induction of Mig 29K fighters, P8I maritime reconnaissance aircraft as well as multirole helicopters," he said.

Meanwhile, Navy officials have said the third stealth frigate INS Sahyadri will be inducted into operational service on July 21.

This would be the third of the Shivalik Class stealth frigates being produced indigenously by the Mazagon Dockyards Limited.

Admiral Verma also said that the Indian Navy has been working with its counterparts in China, Japan and South Korea, to end the scourge of sea piracy and India's efforts had "nearly eradicated piracy in our waters".

Verma said: "It may surprise some to know that our anti-piracy operations have thus far been coordinated trilaterally with the Chinese and Japanese and very recently this initiative has included the South Korean navy. Such are the opportunities in the maritime environment".

Expressing satisfaction over the increasing allocation for the navy in the defence budget, Admiral Verma said: "Right until 1981 the Navy was constantly under 9 per cent of the Defence Budget and during times of crises, it was between 3 to 4 per cent.

"This year we crossed the 18 per cent mark, with the Defence budget at USD 36 Billion".

He added: "Though, in my view this is still a shade short - the important takeaway is that there is an increasing realisation that the destiny of our nation is entwined with our maritime destiny".

A generation ago, he said the Chief of Indian Navy would have had to contend with the challenges posed by what he called a national psyche of 'sea blindness'.

"Today, we are in gratitude of the efforts of our Veteran community that we suffer no such impediment. The Government of India is completely seized of the imperative to have a credible maritime force that is commensurate to the requirements of our national interests given the compulsions of budgetary boundaries," he said.

According to him today's global security environment was characterised by the changing nature of conflict, the predominant feature being that the challenges and their possible solutions are globalised in their character.

"Easy access to disruptive technology, sophisticated arms and distorted ideologies, have resulted in the emergence of non-state, trans-state as well as state-supported actors who are employing asymmetric means to damage political as well as social structures".

"Nanotechnology, robotics, biotechnology, nuclear proliferation and cyber warfare may change future warfare in unforeseen ways. We have had to recalibrate our responses accordingly".