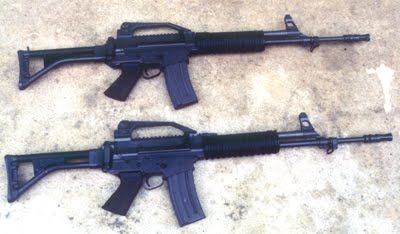 EAST Timor's small army will be supplied with Indonesian weapons after the signing of a ground-breaking agreement between the two countries that were once deadly enemies.

Australia has 380 military personnel in the half-island state and has a close security relationship, but some in the capital, Dili, complain that Canberra can be excessively bureaucratic in its dealings on defence.

The deal was expected to be quickly ratified by the East Timor parliament, diplomatic and government sources in Dili told The Australian. It is understood the agreement will also cover the training of East Timorese military and police officers.

At the signing on August 8, Mr Gusmao and Mr Yusgiantoro were pictured hoisting aloft an Indonesian-made light machine gun of a type to be acquired by the East Timor Defence Force.

The weapon is a local variant of the Belgian 5.56mm FN Minimi.

The agreement will also provide for the establishment of a Timor Leste-Indonesia Defence Co-operation Joint Committee to co-ordinate broader areas of co-operation.

The agreement also covers co-operation on aviation, although no details of this have emerged. However, there have been suggestions that East Timor wants to acquire military helicopters.

East Timor has gone to diverse sources for its military equipment and has patrol boats from Portugal, South Korea and China.

It made a lot of sense for Australia, Indonesia and East Timor to have a strong collective relationship and good relations with one another, Major General Abigail said.

He said that Australia would remain very deeply involved in training the East Timorese forces and advising the Dili government.

"East Timor is diversifying its contacts in the region and clearly wants good relations with them all," Dr Fernandes said.