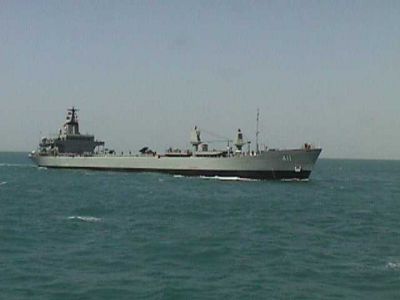 Khartoum - Iranian warships will return to Sudan on Friday, the armed forces said, one month after a similar port call followed Khartoum's accusation that Israel bombed a military factory.

Sudan's links to Iran have come under scrutiny after Khartoum accused Israel of the October 23 strike against the Yarmouk compound, which led to speculation that Iranian weapons were stored or manufactured at the factory in Khartoum.

A Pakistani naval vessel would also stop at the Red Sea port, for two days beginning on Thursday, Saad said.

During their visit the three ships would get "fuel and other logistic materials", he added.

A pair of Iranian warships spent about two days in Port Sudan late last month in a visit which Saad said supported "strong political, security and diplomatic relations between the two states".

Relations between Tehran and Riyadh have been tense for years over many political and security issues.

Iran's Press TV reported that the Kharg and Admiral Naghdi had been sent to the Djibouti area in September "to convey Iran's message of peace to the regional countries and maintain the security of shipping corridors against maritime terrorism."

Israel refused all comment on Sudan's allegations about the Khartoum factory blast.

But a top Israeli defence official, Amos Gilad, said Sudan "serves as a route for the transfer, via Egyptian territory, of Iranian weapons to Hamas and Islamic Jihad terrorists."

Eight days of fighting between Israel and Hamas, which rules the Gaza Palestinian territory, ended on November 21 with an Egyptian-mediated truce after 166 Palestinians and six Israelis died.

The Jewish state has accused Iran of supplying Hamas with its Fajr 5 missile, used to target Tel Aviv during the conflict.

Khaled Meshaal, exiled chief of the Hamas movement, is a frequent visitor to Sudan, most recently on November 15 when he spoke at a meeting of Sudanese Islamists.

Meshaal said Sudan is "on the top" among supporters for the Hamas armed wing, the Ezzedine al-Qassam Brigades.

Khartoum has accused Israel of spreading "fabricated information" about links between the Yarmouk military factory, Hamas and Iran.

Sudan's foreign ministry denied Iran had any involvement in the Yarmouk factory.