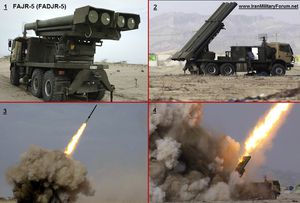 The missiles successfully engaged designated targets during the first day of ground drills at an operation zone in Kashan, Isfahan Province, near Tehran, as reported by Fars News Agency.

Speaking prior to start of the grills, Ground Force lieutenant commander general Kiomars Heidari said that the missiles have already completed their respective test-firings and will now be tested for operational efficacy.

Several rocket and missile units of the Iranian Army Ground Force have participated in the wide-scale drill, which was aimed at validating their operational preparedness and also improve their defensive capabilities.

Designed and manufactured by the Iranian Aerospace Industries Organization (IAIO), Fajr-5 is a 333mm surface-to-surface artillery rocket system (ARS) with a maximum range of 75km, while Naze'at-10 is a medium-range ballistic missile (MRBM) with an operational range of 100km.

Fajr-5 is an unguided artillery rocket system primarily designed for engagement of a wide range of enemy ground targets such as command centres, and radar stations, and can also be equipped with a radar to track and also engage naval targets.

An extended-range variant of the Nazeat-6 ARS, the Naze'at-10 can be fired from L2 and L3 FROG launchers, and is used for destruction of enemy's anti-fire barriers and motorised armoured devices.