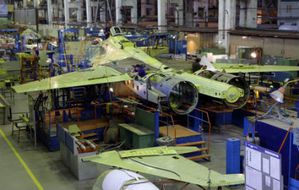 London - Irkut is to accelerate its delivery schedule under a Russian air force order for 30 Sukhoi Su-30SM strike aircraft, with its first examples now to be handed over before the end of this year.

Moscow signed a production deal for the two-seat Su-30SM in March, when Irkut announced that the type would be handed over between 2013 and 2015. The new plan to deliver the first examples this year was announced by company president Oleg Demchenko, as Irkut also released an image of an aircraft on its final assembly line in Irkutsk.

In addition to its utility as a multi-role combat aircraft, the Su-30SM will also provide the Russian air force with an advanced training capability, as it looks to bridge the gap to the future introduction of Sukhoi's fifth-generation PAK-FA/T-50 fighter.

Irkut also expects to deliver a total of 15 Yakovlev Yak-130s to the same service this year, under a 55-aircraft order signed late in 2011. "The Russian air force has started a formal acceptance procedure of Yak-130 combat trainers," it says.