Javelin Sale To India On Track 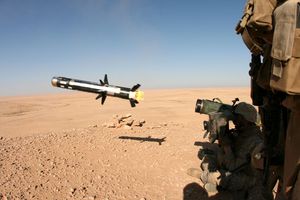 NEW DELHI — The clouds over a U.S. deal to sell FGM-148 Javelin anti-tank guided missiles to India have cleared, with U.S. Defense Secretary Leon Panetta saying the U.S. government is committed to the sale.

Until Panetta’s visit to India on June 5, there were fears that the Indian army’s plan to equip its 350-odd infantry battalions with thousands of Javelin missiles was going to hit a wall, amid reports that the U.S. State Department has slashed India’s request for the missiles and planned to offer only a limited quantity.

Discounting such speculation, Panetta says, “I don’t know where the hell that story came from . . . it’s not true. We haven’t cut the sale in half.

“I want to assure you that we’re committed to a full sale of the Javelin to India,” he says. “And we are working very closely with India not only on that sale, but on other sales as well to try to improve their capabilities.”

Faced with a huge shortfall of anti-tank missiles and the delayed induction of the indigenous Nag missile, India has been scouting for adequate offensive systems and has been in talks since 2008 with the U.S. about the Javelin, which is built by Lockheed Martin and Raytheon.

Panetta admits that the bureaucratic process in the Obama administration has delayed several military sales to India, and the Javelin deal is no exception.

“Oftentimes we run into the barriers of various laws that have been passed either by our Congress or your congress and that sometimes provide bureaucratic barriers to trying to complete these sales,” Panetta says. “I have asked my deputy secretary Ash Carter to oversee this effort and try to develop a broader strategy to be more effective in trying to reduce the barriers and improve the efficiency in those sales. So that’s the approach that I’m hoping to take,” Panetta says.

U.S. defense sales to India have crossed the $8 billion mark over the past decade, and the relationship between the two countries must now mature from the current buyer-seller arrangement to co-production and joint research and development, Panetta says.

In 2010, India sent a letter of request to the U.S. government for procurement of the third-generation missile off the shelf under the U.S. foreign military sales (FMS) program. Defense Minister A.K. Antony did not give any indication of the quantity of missiles to be procured or the number of the weapons to be made in India under the accompanying transfer-of-technology license.

He says the deal is “under process,” but declined to divulge any financial details. “That will get finalized once the contract is signed,” Dahiya says, without providing any time frame. However, informed sources say the deal could be worth $1.5-2 billion.

Indian infantry units are currently equipped with variants of the second-generation, 2-km-range (1.2-mi.) Milan and 4-km (2-5-mi.) Konkurs anti-tank missiles. These missiles are made by the state-run Bharat Dynamics Ltd. under license from France’s MBDA and the Russian Tula Machinery Design Bureau.

The Indian army began considering acquiring the Javelin after it rejected the Israeli-made Spike anti-tank guided missile during trials in 2008. India’s interest in the Javelin increased since the missile was demonstrated in a live-fire exercise during the Indo-U.S. Yudh Abhyas exercise in October 2009, held in central India’s Madhya Pradesh state. Indian troops were able to master the missile within 30 min. during the exercise.

According to Raytheon, the 22.5-kg (50-lb.) Javelin can be readied within 30 sec., reloaded within 20 sec., and target low-flying helicopters, vehicles, bunkers and buildings with precision. The missiles have a shelf life of 10 years.