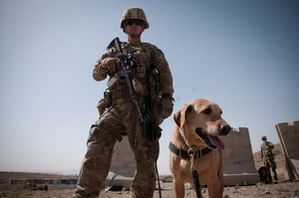 Soldiers on today's modern battlefield have tools that everyone knows of. People often think of rifles, hand grenades and up-armored vehicles -- but what about dogs? Soldiers deployed to Afghanistan with the 4th Infantry Brigade Combat Team, 1st Infantry Division, known as the "Dragons," are changing the game when it comes to finding roadside bombs in their area of operations.

Pfc. John Casey, an infantryman and native of Orting, Wash., is a member of a Tactical Explosive Detector Dog team, or TEDD, supporting operations in Paktika and Ghazni provinces.

Missions throughout the provinces are two-fold: routine counter insurgency operations and enabling the Afghan National Security Forces to protect and defend their country's civilian population against threats by insurgent extremist groups.

The training to be a TEDD handler is rigorous, and it doesn't stop state-side. As enemy tactics change, the TEDDs program adjusts accordingly to continue providing an invaluable service not only to U.S. troops here, but also to the people of Afghanistan.

Casey carries himself as a true professional; even during training, he's got his game face on. Soldiers fighting in today's Army have more responsibilities than ever before, in particular this 27-year-old private who is responsible for the safety of the men and women he goes on patrols with.

On missions, Casey said he focuses on his individual mission of monitoring his K-9, Roxy, as she picks up on scents. At the same time, he remains tactically aware of what is going on.

"If someone walks alongside of me, I'll stop them and wait until the area is cleared," said Casey. "I just keep pushing forward because my attention is on my dog."

Casey makes the comparison of growing up with hunting dogs to working with his battle-ready K-9 here in Afghanistan.

"They both have a desire to work; that's their sole purpose. Yeah, they'll go out and play with you, but you can tell it's a completely different dog. When you're going out bird hunting or to find a bomb, they just know it's time to go to work and 'dad' doesn't want me to play right now," he said.

Casey is enthusiastic about his job, and you get a genuine sense that Casey is a guy the "Dragon" troops want on their patrols.

"There's nothing like it," he said. "You can blow something up, shoot any gun, but at the end of the day you can't play with a dog out here unless you're a handler."