Malaysia May Decide on Super Hornets Within Next Two Years 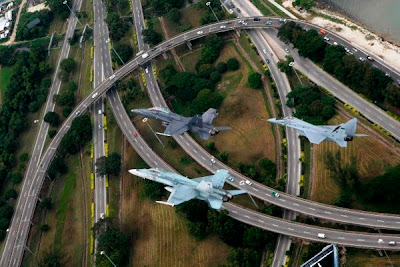 Boeing projected that Super Hornet will be choosen to replace MiG-29N of the RMAF (photo : Aus DoD)

BRISBANE, (Bernama) - Malaysia may decide on the multi-role strike fighter, Boeing's F/A-18E/F Super Hornet within the next two years, vice president F/A18 & EA-18 Programs Boeing Military Aircraft, Michael K.Gibbons said.
"Absolutely, we still have our offering to Malaysia," he said when asked if Boeing was still pursuing the deal with Malaysia for the Super Hornets, which have the capability, flexibility and performance necessary to modernise the air or naval aviation forces of any country.
The Super Hornet's suite of integrated and networked systems provides enhanced interoperability and support for ground forces as well as the overall force commander.
Although Malaysia would make its own selection on the timeline, "we suspect they probably would make a decision within the next two years," he said.
Boeing, the U.S aircraft manufacturer, has been negotiating since 2002 on the Super Hornet deal with the Royal Malaysian Air Force (RMAF), which currently operates eight earlier generation two-seater F/A-18Ds.
However, it is common for countries to take time to make a decision and therefore it is perfectly fine for Malaysia to take its time, he told Bernama during a media briefing on the delivery of last four of 24 F/A-18F Super Hornets to the Royal Australian Air Force (RAAF) Base at Amberley here.
"It is a decision (that involves) a lot of money (and) to create defence structure that you are looking for, and defence is a serious decision, obviously countries want to make sure they get it right (as to) what they are looking for," Gibbons said.
Gibbons declined to reveal whether Boeing had proposed the single-seater Super Hornet E model or the two-seater F model to RMAF, but noted that 18 units was what had been communicated so far.
Both models are true multi-role aircraft, able to perform virtually every mission in the tactical spectrum, including air superiority, day/night strike with precision-guided weapons, fighter escort, close air support, suppression of enemy air defenses, maritime strike, reconnaissance, forward air control and tanker missions.
The F/A-18E/F has exceptional combat maneuverability, unlimited angle of attack, high resistance to spins and departures, and ease of handling and training. Its reconfigurable digital flight control system can detect damage to or full loss of a flight control and still allow safe recovery.
These and other enhancements ensure the Super Hornet remains combat relevant through the coming decades.
With a total of 11 weapons stations, the Super Hornet gives war-fighters extraordinary payload flexibility by carrying a mixed load of air-to-air and air-to-ground ordnance.
"Malaysia has all the information that it needs on the Super Hornet, including the International Super Hornet roadmap (programme)," he said.
Labelled as the next evolution of the Super Hornet to be ready by 2015, it would come with the next generation cockpit, internal infrared search & track, enclosed weapon pod, adding missile warning system and conformal fuel tank.
"We are working with General Electric on enhancing the performance of engines, speed acceleration and range durability," he said.
(Bernama)
Partager cet article