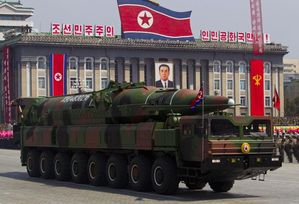 SEOUL — Apparently new long-range ballistic missiles displayed at a North Korean military parade this month were mock-ups, according to two German experts who termed the exercise “a nice dog and pony show”.

One of the missiles on show in Kim Il-Sung Square on April 15 — transported on a launcher of apparent Chinese design — seemed to be a new addition to the nuclear-armed country’s long-range arsenal, according to analysts at the time.

But Markus Schiller and Robert H. Schmucker, of Schmucker Technologie, said all six of the road-mobile intercontinental ballistic missiles (ICBMs) on show that day were models.