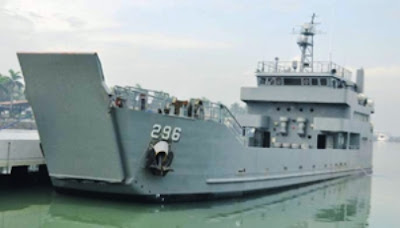 THE Navy is preparing for the turnover from the contractors of the first 51.43-meter Philippine-made landing craft utility (LCU) designed for combat support missions, Lt. Col. Omar Tonsay, Navy spokesman, said on Monday.

“We’re finalizing preparations in connection with the completion of a Philippine-made naval vessel for use of Fleet-Marine Operating Forces as well as other military forces stationed all over the Philippines for internal as well as external defense operations,” Tonsay said.

The Navy has yet to name the ship.

Earlier, the Armed Forces chief of staff, Gen. Eduardo Oban Jr., announced the near completion of the inter-island and coastal operations watercraft capable of logistics transport and amphibious operations.

Tonsay said the LCU Acquisition Project is part of the 2002 Revised Reprioritized Project List with an approved budget of P189 million.

“The LCU is being jointly constructed by Propmech Corp. of Manila for the engine and propulsion system and the Philippine Iron Construction and Marine Works Inc. of Misamis Oriental for the hull and ship’s fixtures,” he said.

“Our new ship is manned by 15 personnel or crew and has a capacity of 200 passengers or 200 soldiers. It has approximately displacement capacity of 579 tons with a cargo space area of about 250 square meters, or a maximum of 110 tons. Its cruising speed is 14 knots,” Tonsay said.
He said the LCU will be a big boost to the country’s naval fleet that was reinforced by the acquisition of the 36-year-old BRP Gregorio del Pilar, a Hamilton-class cutter that was retired by United States Coast Guard.
Repairs of the cutter are almost complete at a dry dock in Batangas.
“Baka isabay na ang pag-launch ng LCU sa commissioning ng cutter pati na ang presidential yacht [BRP Ang Pangulo] ni-repair din,” Tonsay said.
(Business Mirror)
Partager cet article