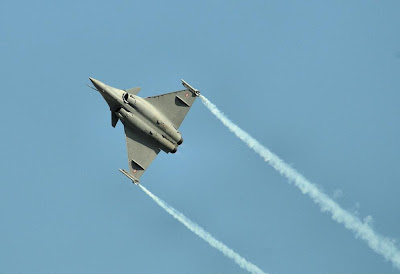 The Dassault Rafale, in this photo taken yesterday (by Pervez 183A) ahead of the Dubai Air Show 2011, displays none of the turbulence that has defined the run-up to the show. For the Rafale certainly. Undoubtedly the biggest military news ahead of Day 1 of the show was host nation UAE sending feelers to EADS Cassidian for the Eurofighter Typhoon, a gesture that has stung Dassault something nasty -- the French government has, for months, made it plain that a $10-billion deal for 60 Rafales was expected at any time. It is not clear just yet why the UAE has decided to look at other options. Could it be another Typhoon-Rafale war? Not if the Americans succeed in wedging the F-15 in. Interesting times. Stay tuned.