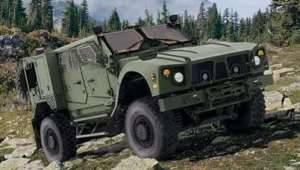 Oshkosh Defense’s response to the TAPV solicitation was submitted to the Public Works and Government Services Canada (PWGSC) last week.

“Today, Oshkosh has delivered the best solution for the TAPV program including the most advanced military vehicle technologies and the finest Canadian-based sustainment services for the DND,” said Serge Buchakjian, senior vice president and general manager of International Programs for Oshkosh Defense. “Our TAPV is a fully integrated vehicle that is customized to the Canadian Force’s specific requirements, offering them the best-value solution. With our partners at General Dynamics Land Systems-Canada and Oshkosh Corporation's London Machinery, Inc., we can produce the vehicle in a way that creates considerable benefits for the Canadian economy for the next 25 years.”

The TAPV is intended to replace the Armoured Patrol Vehicle (APV) and the Coyote reconnaissance vehicle, to help ensure the Canadian Army remains capable of effective training, supporting domestic operations and sustaining deployed forces as part of the Canada First Defence Strategy. The Oshkosh TAPV, which is based on the company’s proven Mine-Resistant Ambush Protected All-Terrain Vehicle (M-ATV) platform, leverages a mission-proven chassis and the patented TAK-4® independent suspension system used on more than 20,000 military-class vehicles, which have proven highly-effective in some of the most extreme operating environments, including Afghanistan.

In independent testing conducted to date, the Oshkosh TAPV has undergone on- and off-road durability validation, successfully met ballistic and other survivability threat requirements (including the use of steel-pot method for NATO STANAG blast tests), and completed extensive live-fire demonstrations of the fully integrated dual Remote Weapon Station (RWS). The combination of these activities demonstrates the effectiveness, maturity and reliability of the Oshkosh TAPV.