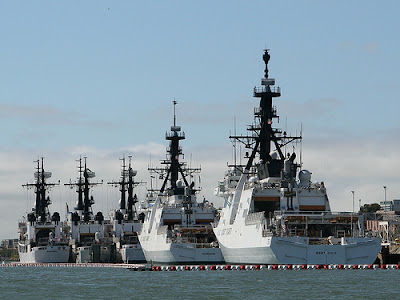 WASHINGTON D.C.--The Philippine Navy will likely get its second Hamilton-class cutter next year, boosting its capability to patrol the country’s maritime borders even as it races to finally acquire missiles for its ships.
But Vice Adm. Alexander Pama, Navy Flag Officer-in-Command (FOIC), said the bigger challenge is not in getting the new weapons the Philippine Navy needs but in improving its “absorptive capacity” to operate and maintain them.
“We have to consider everything,” he told ABS-CBN News. “Buying equipment is the easiest thing to do. The more difficult part is the capability of people because for so long we were concentrated on helping in the counter-insurgency effort. Now we’re shifting to external defense and a conventional navy. That needs a re-adjustment of the skills of our people and that doesn’t happen overnight.”
Meanwhile, the Navy chief downplayed the “freak” collision of a Philippine patrol ship with a Chinese fishing fleet “mother ship” near Recto Bank earlier this week. The patrol ship, reportedly the World War II-vintage BRP Rizal, was trying to take a closer look at the Chinese vessel when it experienced a problem with its rudder, Pama explained.
“It was an accident,” he stressed, adding that the BRP Rizal was investigating reports of poachers in the area. Recto Bank lies about 80 miles northwest of Palawan and is well within the country’s economic zone.
Pama was on his way to the biennial Sea Power Symposium in Newport, Rhode Island where he will address about 70 chiefs of navies from all over the world on “maritime terrorism”. The event is organized by the US Navy.
He stopped briefly in Washington DC to brief think tank groups on the state of the Philippine Navy and naval challenges in the South China Sea.
At the Sea Power Symposium, Pama said he will be sharing the Philippine Navy’s “best practices” in combating terrorism at sea. “They can see that we’re doing something right there and it’s something we can share with the other navies,” he said.
As former commander of Task Force Stingray, an elite naval force created following the string of Abu Sayyaf attacks on beach resorts, he stressed the need to pre-empt terrorists while they’re still on land.
“You don’t address the event itself because by that time it would be too late. Maritime terrorism starts on land,” he said, adding that since Task Force Stingray was established the Abu Sayyaf was never able to replicate the kind of raids it launched on Sipadan Island or the Dos Palmas resort.
But as the Philippine Navy’s focus turn increasingly on the Spratly Islands and the country’s need to tap its vast resources, Pama stressed that "no matter what and no matter with what, we will carry out our mandate even if all we can do is spit on them.”
Pama said they are laying down plans to upgrade the Philippine Navy’s capabilities all the way to the end President Aquino’s term. “The President said he can not commit for the next administration so we’re concentrating on the ‘doables’ and on what the economy can support,” he explained.
Rear Admiral Orwen Cortez, Philippine Navy vice commander, is scheduled to visit the US in early November to inspect another Hamilton-class all-weather high-endurance cutter (WHEC) that could be retired and turned over to the Philippines next year.
A first Hamilton-class cutter was turned over earlier this year and is now deployed with forces patrolling western Palawan.
The third Hamilton-class cutter is projected to be acquired by the Philippine Navy in 2013.
Pama also revealed that they are now preparing to acquire some missile technology. The Philippine military is the only one in Southeast Asia that still does not have missiles. “It’s in the drawing board. I can’t say when but if things turn out as planned, it will be more sooner than later,” he told ABS-CBN News.
Despite recent irritants over the Spratlys dispute, Pama said he was convinced that competing countries were committed to a peaceful resolution of their overlapping claims. “I wouldn’t say it’s getting more dangerous; there are just issues and challenges confronting everybody. I can say the neighborhood has states that are responsible enough. No nation, at least within ASEAN, is out there to make trouble.”
(ABS-CBN News)
Partager cet article