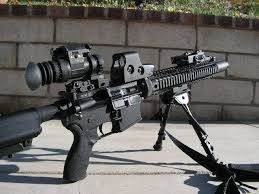 Point Trading alleges that Elbit and its subsidiary ITL Optronics Limited have made serious misrepresentations to the Australian Department of Defence in regard to Point Trading’s exclusive rights to supply the Mini N/SEAS night vision monocular, N/CROS binoculars and other ITL products in Australia and New Zealand.

Point Trading claims that the misrepresentations constitute misleading and deceptive conduct, and will ask the Court for an injunction to stop Elbit, ITL and Elbit’s local subsidiary, Elbit Systems of Australia Pty Ltd, from continuing to make misleading statements about Point Trading’s rights.

“We have been supplying these products to the Defence departments in Australia and New Zealand for over 20 years, and overnight Elbit has jeopardised the goodwill in our business. We have been in business for almost 25 years and employ 25 full time and 5 casual staff in Melbourne. By attempting to deal direct with our customers, Elbit is simply trying to tie up the market and put Australian manufacturers out of business” said Avner Klein, CEO Point Trading Group.

Point Trading has been the exclusive supplier of the ITL Optronics Mini N/SEAS and N/CROS product lines in Australia and New Zealand since 1989. In 2010 it signed a an agreement with ITL Optronics, under the terms of which ITL agreed to provide Point Trading with the right to locally manufacture, assemble and service night vision products until at least 2020, making it the last manufacturer of night vision products in Australia.

In that agreement, ITL also promised it would not market, sell or manufacture the products directly or indirectly in Australia or New Zealand. By doing this deal, Point Trading ensured continuity of supply to both the Australian Defence Force and the New Zealand Defence Force.

“It was becoming increasingly clear that ITL was unable to meet its commitments to Point Trading and so we took the important step of securing supply for Australia and New Zealand by buying the rights to the products,” said Klein.

“Point Trading paid ITL for exclusivity rights for the manufacture and further development of the Mini N/SEAS and N/CROS products, and obtained production process files including drawings and processes, and letters of authority to be the exclusive supplier for the Australian and New Zealand Market until 2020,” said Klein.

Elbit Systems, one of the world’s largest defence companies, bought a majority share in ITL in October 2010 and since then has constantly attempted to circumvent the existing contract and damage Point Trading’s business by trying to trade direct in order to cut out Australian businesses.

Point Trading has attempted to resolve this matter to no avail and has now no option but to ask the Federal Court to adjudicate in order to protect its business.

“Large defence conglomerates like Elbit come to Australia and push around small organisations like us that have successfully served our Defence Force for more than two decades, use bullying tactics and contribute little to the local economy,” said Klein.

The case will be first heard on Friday 23 September 2011 at 9:30am at the Federal Court in Melbourne.